Is this the end of the rivalry, or the start of a respectful friendship? 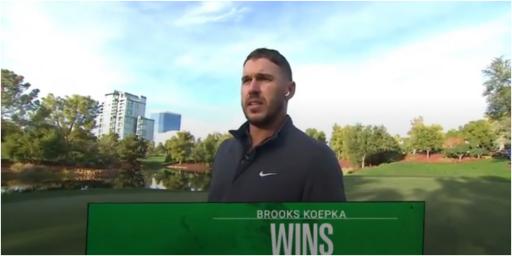 Brooks Koepka won the fifth edition of The Match with a decisive 4&3 victory over Bryson DeChambeau.

Koepka started like a freight train and was up early and sank putt after putt.

DeChambeau had no answers. In the end it was sealed with a handshake and a simple "good job" from 28-year-old DeChambeau.

Before The Match the two bumped fists. DeChambeau told Koepka: "Good luck, have some fun today."

They both did. Trading barbs as Koepka got dialed in early at the Wynn Golf Club in Las Vegas.

"I've gotta be honest, I've never been up this close watching (Bryson) hit a ball... but holy cow," Koepka remarked.

Perhaps the finest thing about the fifth edition The Match came from Phil Mickelson on the commentary.

"I don't think I could pull off a pink shirt," Mickelson said dryly of DeChambeau. "But I feel like he (Bryson) is doing it."

There were other moments of great hilarity too. When Lefty retires, there is definitely a spot for him on the broadcast side.

Charles Barkley was good fun. "Fairways are overrated," he told DeChambeau after a wild tee shot.

His thoughts on yoga? "It's just stretching. They call it yoga to charge you more."

But there is no doubt about it. Mickelson loves to talk smack. His thoughts on the Ryder Cup? "An historic beatdown of epic proportion".

Koepka, 31, took the early lead, going 1UP thru two. Mickelson predicted this.

DeChambeau put his tee shot up close at the third hole as Koepka missed the green.

Mickelson was engaging throughout, asking the players to talk them through their thought processes.

“How do I get Phil out of my ear while I’m putting?” pic.twitter.com/huJP1JeIqe

With DeChambeau it is anything but straightforward.

He talked us through an 11ft birdie putt in fine detail then added: "It's pretty simple guys".

Mickelson's response: "Did everyone at home get that?"

DeChambeau's putt came up short, and Koepka scrambled for par and retained his lead.

At the next hole, Koepka sent his tee ball wildly off line. "That's stuff I like to do," chimed Lefty.

Brooks after Bryson said he might need to yell fore if he hits it too straight and too far and brings whoever was standing out there into play. pic.twitter.com/0tH5jY27DM

Brooks is pouring it on Bryson

It led to a discussion about using lasers. Mickelson said he didn't know why they couldn't use them on the PGA Tour.

They were allowed to use them at the PGA Championship at Kiawah Island, where Mickelson won.

"Then why did you still play so slow?!" Koepka asked of Lefty.

Koepka remained 1UP after four, then took the next.

At the par-3 sixth, Koepka drained a big putt for birdie to go 3UP. "Any questions?" he asked.

Certainly at that point DeChambeau had no answers.

No excuses, DeChambeau said. Mickelson translated: "He's going to put his mind in beta and make some birdies".

Chase Koepka proved a good caddie, and his conversations with his older brother were interesting.

"I'm telling you what man that driver is unbelievable," Koepka said of his new Srixon equipment as he dialed it in.

After he went 4UP, he asked Mickelson: "Hey how you feeling about your prediction right now?"

Koepka also took the time to tell us how he almost lost the U.S. Open trophy in Las Vegas while partying.

4&3 in a 12-hole match. @BKoepka wins The Match vs. Bryson DeChambeau. pic.twitter.com/Ok48Zdpy0B

Apparently, a hostess at a restaurant returned the top of the trophy to Koepka. Then he left the trophy outside his room all night.

Koepka was dormie four. He was ripping it. "Where was this on the PGA Tour?" DeChambeau asked of his Ryder Cup team mate.

"I'm not gonna lie, I just wanted to spanka ya" was the response.

Spank him he did. DeChambeau conceded.

He won the match comfortably.