Bryson DeChambeau is set to put a new golf ball into play at The Wynn Golf Club for The Match. 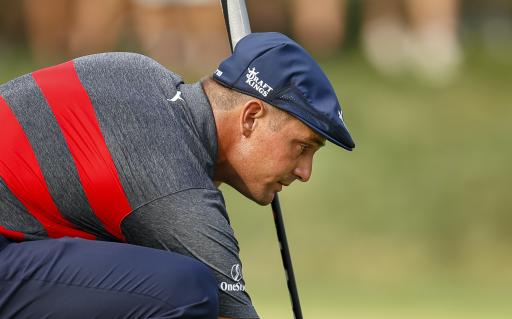 Bryson DeChambeau is set to use a new prototype Bridgestone golf ball for The Match against Brooks Koepka today at The Wynn Golf Club in Las Vegas.

DeChambeau outlined that consistency is a crucial feature that he looks for in a golf ball and he believes he has found this in the latest iteration of the Bridgestone Tour B ball.

Brooks Koepka is also expected to use a new ball from his partnership with Srixon. Koepka recently signed with the popular brand and he is likely to use a Z-star prototype ball in The Match.

Both major champions have strived to advance their equipment, which adds more intrigue and excitement to their 12-hole match in Nevada, which will be commentated on by Phil Mickelson and Charles Barkley.

"I know this golf ball will help me beat Brooks. The technology - allows the golf ball to have the appropriate spin rate and ball speed for every type of shot," DeChambeau explained in the Bridgestone promotional video.

.@b_dechambeau dishes about the new technology in his prototype golf ball for #TheMatch!

We had to bleep out a few secrets he was trying to leak!

"Out of the rough, out of the fairway, miss-hits, chunks, everything. It has definitely improved from last year's ball.

"Out of the rough, what I'm looking for is consistency so when stuff gets in between the face and the ball, we are looking for that ball to perform consistently every single time.

"In order to have an all-encompassing game, you've got to have your wedges good and your driver good with that golf ball and what I mean by that is, you want your golf ball to feel soft around the green, comfortable off the face, spins a lot.

"With your driver, you want a golf ball that doesn't spin that much and is firm off the face."

RELATED: LEE WESTWOOD RULES HIMSELF OUT OF BECOMING THE NEXT EUROPEAN RYDER CUP CAPTAIN

Parts of what the eight-time PGA Tour winner says were bleeped out in the video in order to conceal the cutting edge technology that Bridgestone have used to produce their new prototype.

'The Scientist' has also tested a set of new Cobra 3D Printed prototype irons in the last month, as he looks to improve even further on his 2021 season which saw him win twice and contribute to America's history-making win at the Ryder Cup.

The Match is set to get underway tonight in Vegas and there is no doubt that the equipment changes will add to the entertainment and story of what will be a great showdown between DeChambeau and Koepka.

NEXT PAGE: BROOKS KOEPKA VS BRYSON DECHAMBEAU: HOW TO WATCH THE MATCH, BETTING ODDS & TIPS