FlightScope Golf posted a video of Bubba Watson having some fun on the driving range, adding fuel to the spat between Brooks Koepka and Bryson DeChambeau. 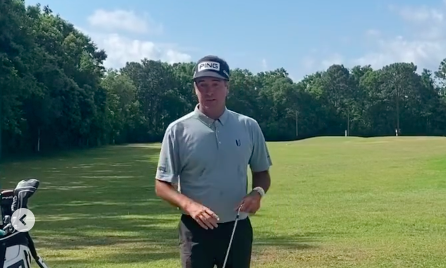 The feud between Brooks Koepka and Bryson DeChambeau has provided great entertainment for golf fans and players alike.

Phil Mickelson posted a tweet aimed at Koepka when the fourth edition of The Match was announced, which will see Lefty team up with NFL's Tom Brady against DeChambeau and NFL's Aaron Rodgers.

Now, FlightScope Golf have posted a video of Bubba Watson on Instagram, who is attempting to hit a target on the driving range which was made up of three famous faces.

The lefthand picture is of Caddyshack's Judge Elihu Smails, on the righthand side is Shooter McGavin from Happy Gilmore and in the middle is Brooks Koepka, or "Bruce" as Watson labels him.

The two-time Masters champion describes how he has a new, powerful shot called "The Stunger" ready for the target, and his friend Gabe designed the target aiming to have three villains on the front.

The 42-year-old took aim at the picture of Koepka and hit an extremely low shot which hit the picture in the middle of the target, making a gaping hole.

Watson is known for incredible shot-shaping and creativity on the PGA Tour and he lived up to his talk in the video with a pinpoint shot.

Golf fans reacted to the video on social media:

"At least he wasn't in his head!" one fan said.

"Everyone want that social media money," one fan commented.

"Next thing you know, Brooks will throw out a diss track!" another fan commented.

"Forget about the curve ball Rickey..." another fan said.