Brooks vs Bryson FEUD: Golf FINALLY has the rivalry it's been after! 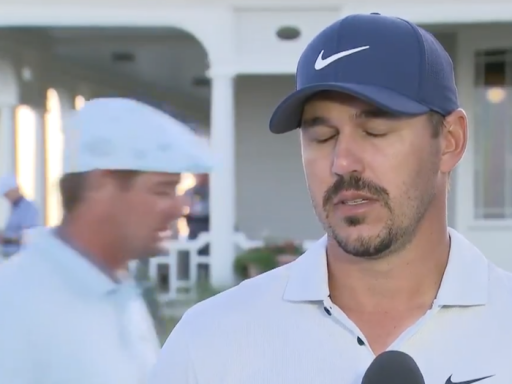 Golf has needed a real rivalry for a number of years on the PGA Tour, but it finally looks to have arrived in the shape of Brooks Koepka and Bryson DeChambeau in 2021.

From Woods and Mickelson and Faldo and Norman, to Nicklaus and Palmer and Snead and Hogan, golf's fiercest rivalries have not only helped get people into the sport but they have got us all on the edge of our seats on a Sunday evening in front of the box.

Don't get me wrong, golf is in an incredible place right now with so many impressive individual players on the PGA Tour, with just about any of the world's top 50 capable of producing magic on their day, but really if we're honest, there haven't been too many recent rivalries to get that excited about.

Well, until now at least. Now it might all be pantomime viewing at the minute on social media, but we will take it and hope it transcends onto the fairways this summer.

Golf needs rivalries and characters in our game in order to push the needle. It's as a simple as that.

Koepka and DeChambeau, the big-hitting American duo, have seemingly never seen eye-to-eye on the circuit in recent years, with shots fired between the two at just about every possible opportunity.

One of them will go 1up with a cheeky one-liner or social media jab, then the other will quickly bring it back to A/S.

But it's their latest spat that has set pulses racing just weeks ahead of the US Open at Torrey Pines, where DeChambeau will be defending his title following a six-shot romp for his maiden major at Winged Foot last September.

Last Friday evening, Koepka was being interviewed by Golf Channel reporter Todd Lewis and he asked the four-time major champion as to what he was able to do well during his second round at the PGA Championship.

Koepka, who went on to finish tied second behind Phil Mickelson, began to answer the question and remark how tough the greens were. Only his "train of thought" was soon interrupted as DeChambeau walked past him in his metal spikes while muttering something in his direction.

So much so, Koepka stopped, eye-rolled and fired an expletive in front of the camera.

"Just gotta start it on the right line," is the strongest suggestion as to what DeChambeau said as he walked past Koepka, who had been explaining how difficult it was to hole putts in the wind at Kiawah Island.

That is an unofficial comment, but it was certainly along those lines.

Their latest dispute then transcended this week into 'The Match 4', which will see DeChambeau and Green Bay Packers QB Aaron Rodgers team up to face Mickelson and Tampa Bay's record-winning Super Bowl QB Tom Brady on July 6.

So what is really going on here? Is it genuine hatred that has been brewing for some time now, or is it all a bit staged as a result of the PGA Tour's new Impact Program that rewards players for their social media engagement in 2021?

In case you're unaware of the latter, the PGA Tour's new Player Impact Program will identify the 10 biggest needle-movers in the sport and compensate them through a $40 million fund, with the system designed to compensate players that produce the most engagement from fans and sponsors.

The fund will be distributed among 10 players at the end of the year, with the most valuable getting $8 million, while the list is not set to be published in the same way that the FedExCup and World Rankings are made public.

Fake or Real? We wanted to know what GolfMagic readers think about the Brooks vs Bryson rivalry.

Check out some of the most notable comments below:

"It's clearly fake, they know what they are doing as a result of this new Impact Program."

"Golf needs this to be real. Either way, it's cracking viewing."

"I cannot wait for these two to play together at the US Open. Stick them in with Phil, and I will have the popcorn ready."

"Definitely real but they are probably playing it up also."

"Who cares if it's real or fake, I would rather watch golf without the snowflake drama thanks."

"This is exactly what golf needs... whether real or staged it's very entertaining."

"I think Poulter was right, it does have a WWE feel about it. Therefore fake."

"I really hope it's real. Either way, looks like we finally have ourselves a rivalry that the game has needed for a while."