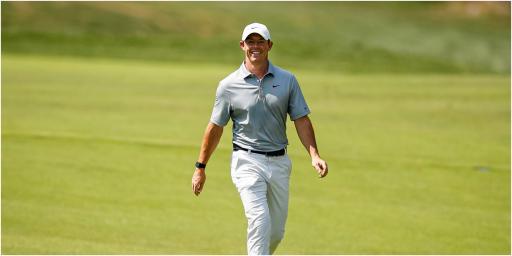 Rory McIlroy made PGA Tour caddie Geno Bonnalie's day when he signed an autograph ahead of the Genesis Invitational.

Usually we would not expect to see a tour caddie look star-struck inside the ropes. Afterall, they mix in the same circles every week.

But Joel Dahmen's carrier looked suitably in awe after he managed to get his CJ Cup football signed by the 32-year-old Northern Irishman.

Just look at his face. Get someone to look at you the way Bonnalie looks at this signed football.

Interestingly, we did not get word on whether McIlroy has accepted Dahmen's offer to play at the Zurich Classic.

McIlroy has never played the tournament at TPC Louisiana so it might be an offer that the Ulsterman may have to pass on.

Last week, Dahmen and PGA Tour pal Harry Higgs got - shall we say - a little bit overexcited at the 2022 WM Phoenix Open.

First Higgs showed us his dad bod, then Dahmen followed suit. It caused 90 seconds of mayhem at TPC Scottsdale.

I've never asked for a pro's signature, but when I saw this football I knew what needed to happen https://t.co/J6XnRq9YXQ

I really hope Rory is like the pretty girl at school that everyone is too afraid to ask to the dance. Maybe this is just what he's been hoping for

Dahmen's week in Phoenix also got off to an interesting start when he was mistakenly introduced as Harris English in the Pro-Am.

He and Bonnalie saw the amusing side of it and laughed it off perfectly. Dahmen finished T62 in the event where Scottie Scheffler finally won.

After his antics at the weekend, he offered McIlroy the chance to pair up with him. "I promise to keep my shirt on," he asked.

"I really hope Rory is like the pretty girl at school that everyone is too afraid to ask to the dance," Bonnalie replied.

"Maybe this is just what he's been hoping for."

McIlroy won his 20th PGA Tour title at the back end of last year when he won the CJ Cup at Summit.

Jon Rahm is the favourite to win the Genesis Invitational at Riviera, hosted by Tiger Woods.

New logo on my bag! I admire the leadership of @workday and am looking forward to partnering with them. https://t.co/R0xkZt9ENW

McIlroy has also announced a new sponsorship with Workday. He will work for the financial management company as a brand ambassador.

Phil Mickelson is also sponsored by them. McIlroy has an estimated net worth of £170m.

Collin Morikawa, also a TaylorMade staffer, has signed a multi-year extension with the brand this week.