Scottie Scheffler and Ted Scott: A PGA Tour duo made in heaven?

Scottie Scheffler first met Ted Scott in a bible study session and their mutual religious beliefs were a key factor in joining forces on the PGA Tour. 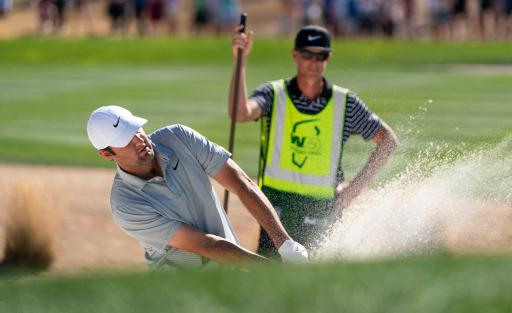 Scottie Scheffler had an idea of what caddie he wanted on the PGA Tour. As Ted Scott tells the story, he wanted to work with a Christian.

At the end of 2021, Scott broke up with Bubba Watson who he'd worked with for nearly 15 years. Together, they won The Masters twice and picked up 12 PGA Tour wins.

With his successful career, it was no shock when Scheffler came calling, but Scott had it in his mind that he was finished with caddying.

A year before they joined forces on the PGA Tour, Scheffler and Scott met in a bible study session and it was their religious beliefs that were a catalyst for their relationship.

"He called me up and said, ‘I really want to work with a Christian.’ That’s how I try to live my life," Scott said on Sunday.

They teamed up for the first time at the RSM Classic in November, and although the 25-year-old finished in tied 57th, they've persevered and it brought Scheffler his first PGA Tour win last week.

Their week at the WM Phoenix Open was just their fifth start together. Scheffler rallied on the back nine at TPC Scottsdale to take Patrick Cantlay to a playoff.

"I do think I was making it a little bit hard," Scheffler said of his victory, ahead of the Genesis Invitational.

"I think at certain points in some of those final rounds I’d make a few mistakes and maybe get down a little bit. I wouldn’t say I felt out of it last week, but I just kept telling myself there’s going to be bumps in the road and I gave myself on Sunday way too many bumps.

"I kept telling Teddy on Thursday and Friday I was scoring really poorly but I was playing fantastic golf, my swing felt great, short game felt good, putting felt good, everything felt really good and I was only 3-under.

RELATED: "I'D WANT A PAY RISE IF WE SOLD THAT MUCH BEER" | GREENKEEPERS ON PHOENIX MAYHEM

"I was really fighting the cut line on Friday afternoon. I had to make a six or seven-footer on 7 for par to stay at 2-under, which was the cut line. Then I ended up making a 40-footer for birdie on 8 to get to 3-under, and got up and down on 9 because I thought the cut line was going to be at 3-under.

"There were a couple of decent moments early in the week where he kept me loose (Scott). He makes me laugh at moments when I definitely don’t want to."

Despite a couple of wayward drives and his characteristic foot-slips, Scheffler boxed a brilliant birdie putt on the third playoff hole to make the biggest breakthrough of his career so far.

In 2021, the signs were there that the man from Texas would be a winner soon. He finished second at the Houston Open, the Dell Technologies Match Play and he finished third at the Memorial Tournament.

At the Ryder Cup, he beat the World No. 1 Jon Rahm 4&3 in the Sunday singles which was arguably the standout performance in America's crushing 19-9 victory over Europe.

Perhaps having Scott on the bag was the final piece of the jigsaw that Scheffler needed? He is certainly a player to look out for again this week at Riviera Country Club.

NEXT PAGE: PHIL MICKELSON GOES ON TWITTER BLOCKING SPREE | HAVE YOU MADE THE CUT?!