If you are Tyrrell Hatton and your golf cart has run out of battery, the last person you need is an unsympathising Ian Poulter on-site... 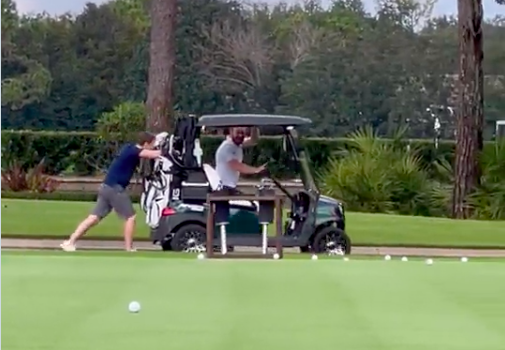 It is no secret that Tyrrell Hatton is one of the most fiery players on the PGA Tour and we have seen him lose his rag on many occasions at many tournaments.

The Englishman is partial to a club throw or an angry rant, but it is this intensity that has made him one of the best competitors in world golf and a winner on the PGA Tour.

In a video posted by Ian Poulter on his Twitter page, it appears that Hatton's golf cart has run out of battery, a nightmare for any golfer that just wants a pleasant round of golf.

As you can imagine, Hatton is begrudgingly pushing the cart along the path with the help of a friend and Poulter does not show much sympathy towards the situation.

In the video, you can hear the three-time PGA Tour winner laughing and making fun of Hatton. In all fairness, the World No. 22 takes the flack quite well.

When @TyrrellHatton didn’t make the Top 10 of PIP so couldn’t upgrade his … pic.twitter.com/hDBi5sLXc7

"When @TyrrellHatton didn’t make the Top 10 of PIP so couldn’t upgrade his (car emoji)," Poulter wrote on the social media post.

It seems that Hatton would not be the only player to be disappointed in missing out on the $40 million prize pool of the Player Impact Program.

Open Champion Collin Morikawa joked that his lucky number was now 11 on social media, after reports confirmed that he had missed out on the top 10 places which would've guaranteed a prize of $3 million.

The heavily scrutinised program has reportedly awarded Phil Mickelson with the top prize of $8 million with Tiger Woods in second place, having only played one tournament in 2021.

Who knows, if Hatton's golf carts keep breaking down and with cameraman Poulter on the scene in quick time, the English duo could see themselves at the top of the pile in 2022.