Steve Stricker said: "I'm down 25 pounds. I'm freshman-in-high school weight. I lost all my muscle. I look like an 85-year-old man, dude. My skin is hanging." 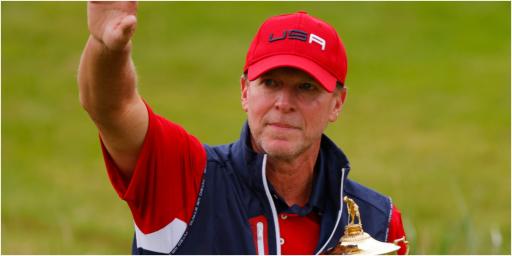 Steve Stricker, the United States Ryder Cup winning captain, has revealed he is "lucky to be alive" after a mystery illness saw him needing hospital treatment after "peeing Pepsi-coloured pee".

Stricker spoke to local media in the United States about how he came down with a sore throat and chesty cough in late October. He also dropped a huge amount of weight.

It was only a month after he saw his young, trailblazing Ryder Cup side smash Team Europe 19-9 in one of the heaviest defeats in the modern era.

Stricker, 54, said he felt a bit better but then his health quickly went down hill. His issues appeared to begin when he came home from hunting on one evening that left him "sweating".

Related: Phil Mickelson or Zach Johnson for the next US Ryder Cup captain?

"I came home from hunting one night and I was like, ‘I don't feel good. My side hurts. I just don't feel right. That night I had the sweats and all of a sudden, my temperature was 103. I went back to my primary and got amoxicillin, a heavier antibiotic. And I think I had a reaction to that. My throat started to close up, my lips got puffy, my glands got puffy, my tongue got puffy. It was like an allergic reaction. I was still having these 103-degree temps."

Stricker told the media that his white blood cell numbers increased and his liver numbers got worse and he was diagnosed with jaundice. He was tested for COVID-19 and the result came back negative.

He was discharged from the hospital 11 days after he went in just before Thanksgiving but then ended up having to go back in. Stricker described to the publication that it this mystery ailment left him "peeing Pepsi-coloured pee".

Stricker is reportedly now back at home with his family in Florida after being discharged late last year.

Related: The greatest Ryder Cup side of all time?

"My heart is in rhythm now. It was jumping in and out of rhythm from Thanksgiving all the way to Christmas Eve. So, knock on wood. And I'm on less medication. The inflammation number that they can find out with blood tests is saying that my inflammation is going down. And it must be, because I'm feeling better. I'm walking around a little bit. I'm starting to be a little bit more active and building a tolerance a little bit better. So, things are definitely better."

Stricker was widely regarded by his young team of Ryder Cuppers as being influential in their win.

His side led by the 5-0 Dustin Johnson was simply too much to handle at Whistling Straits.

Stricker, a 12-time winner on the PGA Tour, has distanced himself from returning as captain when the Ryder Cup comes back to Europe, in Rome, in 2023.

Zach Johnson is the favorite to take over.

Now Stricker has lost a lot of weight. He said he has lost more than 25lbs.

"I'm down 25 pounds. I'm freshman-in-high school weight. I lost all my muscle. I look like an 85-year-old man, dude. My skin is hanging."

Stricker reportedly will have to wait at least half a year before he can think about playing again on the PGA Tour Champions.