While Jon Rahm is competing in Hawaii, Juan Postigo Arce has also been competing in the ISPS HANDA All Abilities Champions Playoff. 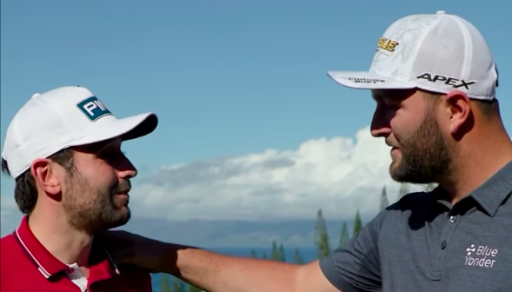 Jon Rahm is making his first appearance in competitive golf since October at the Sentry Tournament of Champions this week, but this is not the only tournament that Kapalua Resort is hosting.

Another is Juan Postigo Arce, a fellow Spanish golfer like Rahm. Arce plays golf with one leg and he is competing in the two-day event that uses Kapalua's Bay Course and Plantation Course.

Johan Kammerstad won the ISPS HANDA Australian All Abilities Championship and Chad Pfeifer won the US Disabled Open. They make up the field of four.

The Sentry Tournament of Champions and ISPS HANDA wanted to make an event that gives the best all-abilities players in the world a similar challenge to the PGA Tour professionals.

Rahm spent some time with Arce and they wished each other well for the week. The World No. 1 was inspired by Arce's endeavour to succeed despite his disability.

"It's amazing what he's able to do and how good he can play golf on one leg. If people haven't seen him hit a ball, they should," said Rahm.

"It's amazing to see the quality of the strike and the quality of ball strike. If he says he's drawn inspiration from me, I've drawn quite a bit, if not more from him as well."

Rahm is currently three shots behind Cameron Smith after 36 holes. He followed up his 66 on Thursday with another 66 on Friday to reach 14-under-par.

Although Rahm hit every fairway and every green in round two, he couldn't match Smith who shot a scintillating score of 9-under-par to reach 17-under-par at the halfway stage.

Rahm is playing with the inspiration he has received from Arce, who proves that whatever issue you are faced with in life, it can be overcome.

PGA tour
jon rahm
juan postigo arce
brendan lawlor
sentry tournament of champions
Previous
Ian Poulter mocks Tyrrell Hatton as his golf cart RUNS OUT of battery
Next
Jon Rahm: What's in the bag in 2022 for the US Open champion?