Cameron Smith fired a fantastic score of 9-under-par at the Sentry Tournament of Champions on Friday to take a three-shot lead heading into the weekend on the PGA Tour. 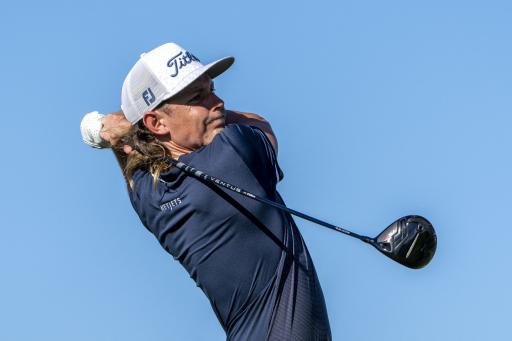 Cameron Smith was in scintillating form at the Sentry Tournament of Champions on Friday, carding a superb 64 to take a commanding three-shot lead into the weekend on the PGA Tour.

Despite making two bogeys in his first two holes, the Australian recovered with nine birdies and an eagle at the 5th hole to race ahead of Jon Rahm on 17-under-par.

Smith, who held a one-shot lead after the first round at the Plantation Course, birdied his final four holes to match the lowest 36-hole score in the tournament's history, which was set by Ernie Els in 2003.

Smith won the Zurich Classic of New Orleans alongside Marc Leishman in 2021 and he is looking for his fourth win on tour. Rahm, on the other hand, is looking to remain at the top of the world rankings.

Having shot a solid round of 66 on Thursday, the Spaniard shot another one on Friday. He didn't make a bogey and hit every fairway and every green in regulation. He is on 14-under-par heading into the weekend.

Since 2003, Cameron Smith is the only player @Sentry_TOC to start the second round 2 over thru 2 and go on to hold the 36-hole lead. pic.twitter.com/5Dr6JKRQ49

The US Open champion has suffered from no rust so far in Hawaii, despite not playing at a tournament since the Andalucia Masters in October.

FedEx Cup champion and six-time PGA Tour winner Patrick Cantlay also went bogey-free in the second round, but shot a 67 to follow up his 66 on Thursday.

He is four shots behind Smith on 13-under-par and The Masters champion Hideki Matsuyama is a further shot back on 12-under-par.

RELATED: GOLFER MAKES HOLE-IN-ONE AND ALBATROSS IN ONE ROUND OF GOLF

Bryson DeChambeau is making his first official appearance on the PGA Tour since the Ryder Cup in September at Kapalua this week. He shot 5-under-par on Friday to reach 9-under-par for the tournament.

Open champion and World No. 2 Collin Morikawa will need a big turnaround this weekend if he is to leapfrog Rahm to become World No. 1.

The 24-year-old shot a conservative 70 on day two to sit on 8-under-par and nine shots behind Smith.