Immelman needed phone call and meeting with Morikawa after "misunderstanding"

Trevor Immelman says he has phoned Collin Morikawa and spoken to him in person after the comments he made about the American during a PGA Tour broadcast. 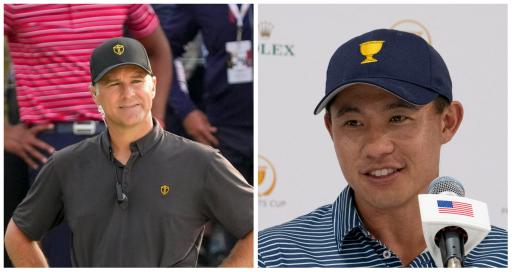 Trevor Immelman says he has spoken to Collin Morikawa after the comments he made about the American during a PGA Tour broadcast, explaining that it was "a complete misunderstanding".

There was perhaps a little bit of confusion as Morikawa was asked about Immelman explaining that he had potentially "reached his bar" to which the two-time major champion explained it was "tough to hear" those words.

Related: Collin Morikawa on which LIV pro he misses the most

Morikawa said at the time:

"Wow, that's hard to hear from him.
"To be honest, I could care less what he says there because I don't think that's my bar.
"I think I've got so much more to improve. I've been near last on putting and I don't think I've even finished close to being average on putting. If I just get my putting to be average I think there is so much more to improve.
"So I don't know, I don't know where that came from but that kind of stings there, I don't like to hear that."

Morikawa later added that he wasn't sure if Immelman's words were intended as a compliment. Or at least it didn't seem that way.

But Immelman was apparently trying to explain that he felt as if Morikawa was putting too much pressure on himself.

He clarified during the broadcast:

"What I was saying was that he got off to such an incredible start in the early part of his career, winning two majors quite quickly, in a lot of ways you start to put extra pressure on yourself to keep that up.
"I think that extra pressure wasn't really needed. Maybe take a step back, get some perspective, understand how incredible that is and then just let that come to you a little bit more.
"We all know how great he is. I've been saying over the last couple of days how I anticipate he will get back on a run like that.

Now it appears that the two have patched things up.

This is how Immelman replied to a post from CBS reporter Kyle Porter:

Complete misunderstanding.
Spoke to Collin on the phone last night and in person on the range this morning. All good.

It would have been surprising had Immelman truly meant to take a dig at Morikawa, considering this classy gesture went largely unnoticed during the 2022 Presidents Cup which showed what kind of person he is.

Morikawa fired rounds of 71, 63, 68 and 67 last week to finish on 15-under par, which was eight strokes behind the champion Russell Henley who claimed his fourth PGA Tour victory in Mexico.

The 26-year-old also explained that he's hired a new putting coach to help him return to form after a winless and "frustrating" 2022.