This moment involving Trevor Immelman at the 2022 Presidents Cup has largely gone unnoticed, but it revealed a lot about his character. 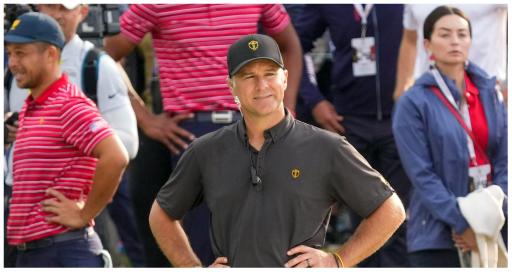 I'll be perfectly honest, I felt a little bit sorry for Trevor Immelman during the 2022 Presidents Cup.

His side were - in my opinion - more adversely affected by the players who have defected to the LIV Golf Invitational Series. Though I'll accept that is hardly the boldest statement.

The LIV players were ineligible for selection as the biennial event is sanctioned by their rival, the PGA Tour.

Unable to draw on the likes of Cameron Smith, Abraham Ancer, Louis Oosthuizen (who might have LIV buyer's remorse), Joaquin Niemann and Marc Leishman, many pundits were predicting Immelman's side were going to be whitewashed.

And while the International side were well beaten, they showed considerable guts and spirit. The final score line was not what was truly expected.

I thought they would be lucky to get to 10 points.

"These guys have got massive hearts. Massive hearts. And I'll go to battle with them any day," an emotional Immelman said after his side lost 17.5 to 12.5.

But let's take you back to Saturday evening and the moment that you might have missed.

Tom Kim - who had Rickie Fowler's former caddie on the bag - was playing alongside Si Woo Kim.

The International pairing had given themselves an opportunity to take a point at the long 18th hole at Quail Hollow Club as the momentum slowly shifted towards the rest-of-the-world side on Saturday afternoon.

Tom Kim had a putt for the win in their four-ball match against Patrick Cantlay and Xander Schauffele.

Of course he drained it and then went absolutely ballistic.

Earlier in the day, he copied Jordan Spieth's famous "go get that" celebration multiple times, leaving his caddie to go and collect his golf ball from the cup after draining bombs.

As you can imagine, the number of International players who flooded the green to congratulate Si Woo and Tom would have left a few blemishes on the putting surface.

Those could have been left for the hard-working greenies to repair.

But Immelman was filmed walking back to the putting surface with a wedge in his hand.

In a moment that revealed a lot about the character of the International captain, he then went to work and repaired the damage.

That was a pretty cool moment. Presidents Cups and Ryder Cups only seem to throw up moments like this. Immelman could have easily spent the majority of the week bitching about his lack of firepower thanks to the LIV Golf Tour.

He should remain as captain, in our opinion.