"It was definitely colourful": Bryson DeChambeau on Saturday at BMW Championship

Bryson DeChambeau played some of his best golf and some of his worst golf in the third round of the BMW Championship. 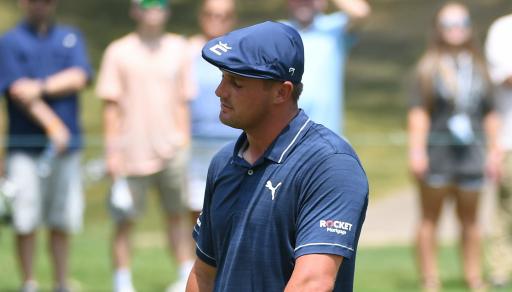 As Bryson DeChambeau walked off the 18th green at the BMW Championship on Saturday, he must have wondered what could have been if he did not make some costly mistakes on the back nine.

After making an incredible start with back-to-back eagles at the 4th and 5th holes, DeChambeau made a birdie at the 8th hole to open up a four-shot lead.

"Yeah, no doubt. It was definitely colourful. I thought I played pretty well on the front nine, I had a mis-hit drive on hole 7, felt weird and from then on out, I wasn't driving it very well. That's what I'm going to go do, and work on that for tomorrow.

DeChambeau finds the water again on 13.

A double bogey puts him one back. pic.twitter.com/FQ3HMUnMs4

The World No. 6 somewhat recovered after his mistakes, making birdies at the 14th and 16th holes to reach 21-under-par for the tournament to lead alongside Patrick Cantlay.

DeChambeau could be on course to pick up his third win of the PGA Tour season, having already won the Arnold Palmer Invitational and the US Open back in September 2020.

The 27-year-old has not enjoyed his best form recently, with only two top-10 finishes in his last 11 PGA Tour events. A win at Caves Valley Golf Club tonight would be his ninth career win on tour and his third victory in the FedEx Cup Playoffs.

"Winning a golf tournament. That's what it's all about. That's why we play golf," added DeChambeau.

"Obviously I talk about the long drive stuff that I'm doing, and all these are the facets for the Ryder Cup, but it's ultimately about winning no matter what. Hopefully, I can go get the job done tomorrow. I've done it eight times; hopefully, I can make it my ninth."