Sergio Garcia had started the final day very well at Caves Valley Golf Club, but it all unravelled at the par-4 5th hole. 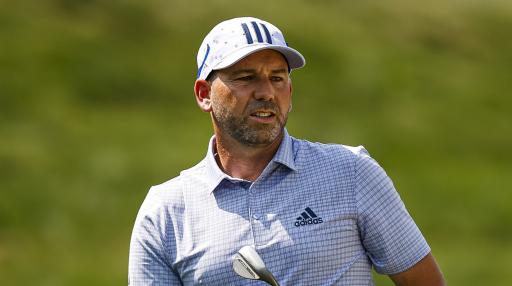 Sergio Garcia was 4-under-par through his first four holes in the last round of the BMW Championship and mounting a serious challenge to win his second PGA Tour title in 2021.

The Spaniard made a birdie on his opening hole of the day and this was followed by a fantastic eagle at the par-5 2nd hole. He moved on to 20-under-par which was within one shot of the lead at that stage.

Garcia rolled in another birdie at the 4th hole and he had found a fantastic rhythm, but this was all halted on the par-4 5th hole, which is driveable for the players this week.

The former Masters champion found the greenside bunker with his tee shot and unfortunately, he took two shots and his ball still remained in the sand.

He ends up with a double bogey at the 5th after struggles in the bunker. pic.twitter.com/F2vVgOGXM7

It took Garcia three shots to get out of the trap and he went on to make a damaging double-bogey, which dropped him back to 19-under-par and four shots behind Cantlay, who began his round with two birdies in his opening three holes.

The BEST FootJoy Spikeless Golf Shoes for you to try before the Ryder Cup!
Vice Golf are offering FREE golf ball personalisation before Ryder Cup!

It was a great shame to see the experienced and popular European falter in the sand, as it looked as though he was mounting a serious challenge to win the 12th PGA Tour title of his career.

Garcia is still very much capable of picking up the BMW Championship trophy, but even if he failed to do so, he is in great shape to qualify for next week's Tour Championship.

Garcia began the week in 44th position in the FedEx Cup standings, but his performance so far this week puts him into a projected 27th place which would see him through to the 30-man tournament at East Lake.