Jack Nicklaus played Augusta National in May and his score was incredible...

Jack Nicklaus revealed to the media on Tuesday that he took his family to Augusta National and surprised everyone when he played 18 holes at the famous venue. 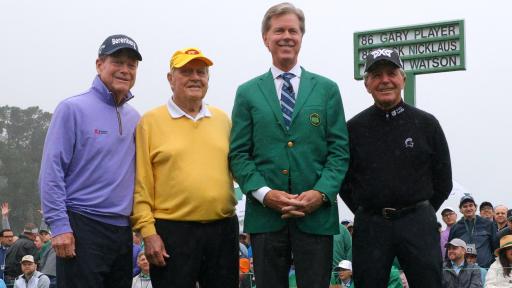 When you are as decorated and as talented as the 18-time major champion Jack Nicklaus, you never lose your ability and desire to shoot the best score you can.

He is 82 years old and his days of maximum power and flexibility are behind him, but he surprised his family members, the people who know him best, when he teed it up at Augusta National a couple of weeks ago.

Speaking to the media ahead of the Memorial Tournament on Tuesday, Nicklaus revealed that he still keeps active on the golf course, however, he suffers from arthritis and swollen ankles.

On the day he and his family returned to the host course of The Masters, Nicklaus managed to shoot an 88. For a man of his age to shoot 16-over-par at such a difficult course with harsh terrains and treacherous greens, it is nothing short of remarkable.

"About two weeks ago, I took Jackie and J3, his son, and Charlie, who is one of his boys, up to Augusta. I had played a scramble, an odd three or four holes here or there," Nicklaus said at Muirfield Village.

"But inflammation has been my problem, and most of the inflammation I seem for some reason to have gotten out of me. I said, okay, I can play with you guys.

"Really, you're going to play with us? I said, yeah. So I played nine holes. He said, we'll see you after. I said, what do you mean? I'm going to play the back nine. I whizzed it around and shot a slick 88 without a birdie, which I haven't made birdie yet this year incidentally.

"But I enjoyed it. I said, well, I'm going to see if I can play again tomorrow. I played again the next day. Why am I playing? I don't know. I'm tired of not playing, I think. I really love to play golf.

"I don't enjoy playing golf the way I've been playing, that's for sure. But when you start to feel a little bit better - I even hit a few shots that were pretty good on Sunday out here. I had a tee shot out at 17, I knocked it, what, 30 yards by those bunkers? From the ladies' tees - excuse me, the forward tees."

Nicklaus has endless course knowledge of Augusta National. He won The Masters six times in his career which is the most of any player in history.

As ever, the Golden Bear is hosting the Memorial Tournament at his signature golf course this week. Last year, he congratulated Patrick Cantlay on winning the event for the second time after he beat Collin Morikawa in a playoff.