Bryson DeChambeau on eve of return: "Things have changed a lot for me"

Bryson DeChambeau says just making the cut on PGA Tour return would be a success but he hopes he can contend at the Memorial. 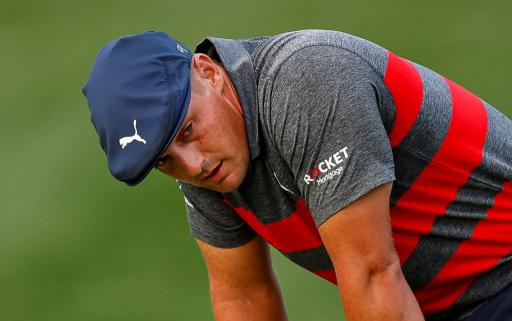 Enthusiastic Bryson DeChambeau says he feels like he can "finally enjoy" golf again as he makes his PGA Tour return after a nightmarish few months dogged by injuries.

DeChambeau, 28, is back in the field at the Memorial in what promises to be a contentious week in the golf world

This week the Saudi-backed LIV Golf Invitational Series announced the names of confirmed participants for their first event next week in London.

DeChambeau was heavily linked with the breakaway league but previously suggested "as of right" now he will play the PGA Tour, hinting that he could perhaps be persuaded otherwise in the future.

The PGA Tour is expected to ban or suspend players - including former World No.1 Dustin Johnson - in the wake of his U-turn.

DeChambeau wasn't asked about the unfolding drama at his press conference at Muirfield Village.

It's likely he wouldn't have too much to say, anyhow. All he appears to be concentrating on is just trying to play 72 holes again.

He believes that a good first week back after wrist surgery is simply making the cut but he also thinks he can contend. He's a previous champion here so knows the course well.

"Things have changed a lot for me. I've learned so much about me as a person and my faith and whatnot through golf having stripped away from me.

"It's been a difficult time for me the past seven months not being able to play golf the way I really want to.

"It still is a little tough every once in a while in the hand to hit golf balls, but for the most part I can't tell you how excited I am to be back out here. I'm very excited.

DeChambeau was asked if he feel he could play 72 holes.

He said: "Yeah, I believe so. I'm glad I have next week off because I'm going to need that to really recover that hand and get it into a place where I feel like I can start playing golf week in and week out, but right now I'm able to have 190 ball speed consistently without really any pain and I've got control of the golf ball, I'm not forcing anything. I'm excited about that. I'm very, very happy.

What has been the biggest shift in his mindset these past few months as he has rehabbed?

"Well, for me, it's been definitely pretty recent, but realizing that I can't put everything, all my marbles into one basket, which is golf," he said.

"There's more to life than golf. It's been definitely eye-opening for me to have a close relationship with the Lord and just more importantly being happy with myself, too, and more importantly getting closer to him.

"For me that's something that's changed in my life that I'm very, very happy with, and I'm going to continue to fight, continue to be my absolute best out here on the golf course and hopefully inspire some kids along the way and do my due diligence like he wants me to.

He added: "I mean, a great week is obviously making the cut. I believe I can put myself in contention. I know this golf course really well. It's definitely a great opportunity to test my speed, as well, a little bit with the endurance.

"But knowing the golf course and being a past champion here, I think I can contend, as well, and hopefully do something pretty unique."