Kaufman takes to social media to reveal how he missed a one-foot putt in Monday's PGA Tour qualifier... 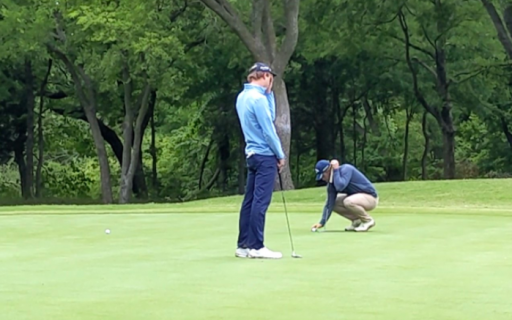 It may have been a comeback year on the PGA Tour for the likes of Rory McIlroy, Jordan Spieth, Brooks Koepka and Hideki Matsuyama, but for other former winners on the circuit such as Smylie Kaufman, the struggles continue.

While Kaufman may be best known as a starter in #S2BK alongside Spieth, Rickie Fowler and Justin Thomas rather than victor of the 2015 Shriners Hospitals for Children Open, the now 29-year-old American has somehow fallen from 48th in the world rankings to a current 1530th.

With just four starts on the PGA Tour in two years, all of which resulted in missed cuts, Kaufman has no status on the PGA Tour as it stands and now has to rely on Monday Qualifying in a bid to get back onto the main circuit.

That was the case this week as he attempted to play his way into this week's AT&T Byron Nelson, which features a field highlighted by Spieth, Bryson DeChambeau and Jon Rahm.

Kaufman played some good stuff on Monday, but came up one shot shy of a playoff to qualify - and he was left to rue a costly missed putt from one foot on 12, something he was quick to tweet about after his round.

There was also a reason for the miss, too, following a rain delay.

Missed a 1 footer on 12 after the rain delay not realizing my ball accumulated so much water and sand. This image can also apply to that moment as well. Miss playoff by 1. #golf https://t.co/Ky4Hk7078p

"Missed a 1 footer on 12 after the rain delay not realizing my ball accumulated so much water and sand," tweeted Kaufman. "This image can also apply to that moment as well. Miss playoff by 1."

Kaufman's post was greeted with plenty of sympathy and encouragement from his legion of fans.

"Keep grinding Smylie, we believe in you," said one Kaufman fan.

"Miss you on Tour, you're one of my favourites," said another.

"A big step in the right direction, keep up the good play," tweeted one golfer.

"Stay positive man, the best is yet to come," wrote another.

NEXT PAGE: DUSTIN JOHNSON WITHDRAWS FROM THE BYRON NELSON THROUGH INJURY - WAS IT THE BACK FLIP?