Moments before CBS showed Rory McIlroy's amazing bunker shot on the 18th hole at The Masters, Sir Nick Faldo gave the game away. 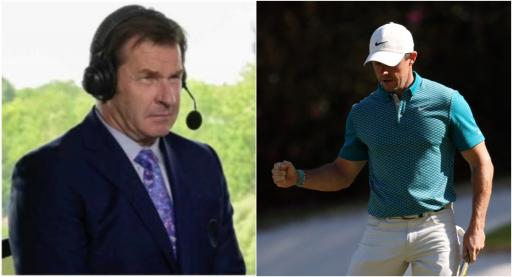 Sir Nick Faldo admitted he got caught up in the moment when he made an early call on Rory McIlroy's bunker shot on the 18th hole at The Masters.

Speaking to the Dan Patrick Show, Faldo described his vision of McIlroy in his Green Jacket and he couldn't contain his excitement when revealing to the viewers that something special had happened at Augusta National before they'd seen it.

The Englishman felt like many of us when watching the Northern Irishman making a Sunday charge at The Masters, and his incredible bunker shot happed right under the nose of the CBS studio where Faldo was sitting.

"I know that was a rookie mistake but I’m sitting right in there when it happened, and it was just off the charts," said Faldo.

"And so Jim’s talking to me and asking me a question. When you hear the patrons roar, the crowd go nuts, you can’t come back and go ‘let’s look at Rory live on the bunker on 18’ because you know it’s now on tape.

"I seriously was shaking because I thought, ‘Rory is going to win the green jacket.’ I thought, ‘something could happen.’

"You know, he’s trying to. We know the story. He pulls off an impossible shot, and his reaction, and I’m sitting right in the middle of it."

The words used by Faldo were: "I don’t want to spoil it. But something incredible has just happened." And then McIlroy did what he did. Unfortunately, it was only enough to finish second to Scottie Scheffler.

McIlroy carded a 64, which is the joint lowest final-round score in the history of the event. It still remains as the missing link to his major grand slam.

Next Page: Phil Mickelson files entry for US Open after skipping The Masters