Although Team Daly got the better of Team Woods at the PNC Championship, John Daly liked what he saw from Tiger. 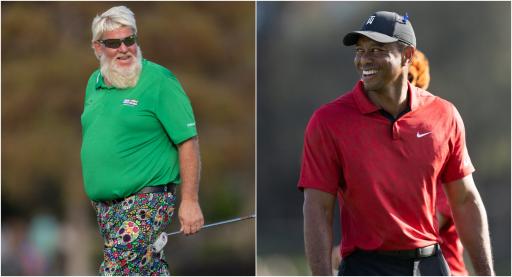 It is the age-old debate: Will Woods catch up with Nicklaus' major record? In February, many golf fans thought this debate was finished after Woods suffered severe injuries in a car crash.

But at the PNC Championship, it was hard not to get carried away with the excitement of watching Woods and his son Charlie in contention in their Sunday red.

The popular duo finished two shots behind Daly and his son John II. But it certainly whetted the appetite and sucked in a lot of speculation as to when we will see the 15-time major champion back on the PGA Tour.

"I think Tiger’s gonna be fine. He looked good. He looked a little tired, but he still looked great. He’ll be back, and I could see it in his eyes," said Daly on 'Fox and Friends'.

"He’s probably gonna beat Jack Nicklaus’ records and be the greatest of all time."

A bold statement indeed from Wild Thing, who is a two-time major winner himself. His son John II also has dreams of playing on the PGA Tour. The 18-year-old is currently on the golf team at the University of Arkansas.

As for Woods, he told the world that a full-time career on the PGA Tour would no longer be possible after the injuries in his right leg almost led to amputation.

Daly also answered questions about whether he could make a competitive return to the circuit. He made 29 appearances on the PGA Tour Champions in 2021 but is there a chance the 55-year-old could add to his tally of five wins on tour?

"I’m not at that level. I can’t compete against these guys right now, no," Daly added.

"It’s going to take a lot of work to get to where I feel like I can compete with these guys and be at a high level."

NEXT PAGE: MEET JIM KAAT: THE MAN WHO SHOT HIS AGE LEFT-HANDED AND RIGHT-HANDED