Xander Schauffele "can accomplish anything" ahead of 150th Open Championship

Xander Schauffele won his first individual title in three years at the Travelers Championship with The 150th Open Championship less than two weeks away. 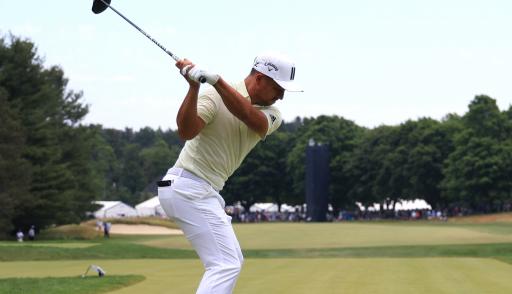 Xander Schauffele is hoping for the same conditions he had in Connecticut when he travels to St Andrews for The 150th Open Championship in under two weeks.

The American's win at the Travelers Championship was his sixth win on the PGA Tour but it was his first win on his own since the Sentry Tournament of Champions in 2019.

He and Patrick Cantlay won the Zurich Classic of New Orleans together in April, so 2022 could represent a change in fortunes for the 28-year-old who made 16 top-fives in the three-year win drought.

Like many other players, he is sitting out the John Deere Classic to focus on the Genesis Scottish Open and then The Open Championship at the home of golf which starts on July 14.

"I will take as many wins anywhere. I’m not one to pick and choose, to be completely honest. Obviously, yeah, it’s the thing that’s the most sought after in our sport (The Open)," said Schauffele, speaking to Hyland who he has been an ambassador for since 2019.

"It’s the thing that’s the most talked about. It’s definitely something that I think about - I wouldn’t say every day, but when I do practice or need that extra kick in the butt for motivation, I do draw on those moments and think about how badly I want to win one of those.

"The style of golf is very different. It’s definitely not a bad thing to win a couple of weeks prior to a major, just because you know you’re playing good golf. But for the most part, going over to Scotland, with the weather.

"It was 90 degrees in Connecticut - balmy for the most part, not too much wind. Hopefully, the weather (in Scotland) will be nice, but historically there is always a good and a bad wave. There’s certain weather you have to fight off during the week.

"There are different golf shots you have to hit in different windows. It’s not going to be the same golf whatsoever that I played in Connecticut, but I can take over a good attitude, knowing that I’m playing pretty solid golf and I should be able to accomplish anything."

Schauffele finished tied second at The Open in 2018, just two shots behind Francesco Molinari at Carnoustie. This was his closest shot at picking up the Claret Jug

His win at TPC River Highlands last week was the first time he converted a 54-hole lead in his PGA Tour career. Schauffele will certainly be one of the players to look out for at the final major of the season.

Next Page: 9/11 tell LIV Golf players in Portland: "We are not going away"