Defending US Open champion Jon Rahm gave a convincing defence of the PGA Tour in a press conference in Brookline on Tuesday, expressing sympathy for commissioner Jay Monahan. 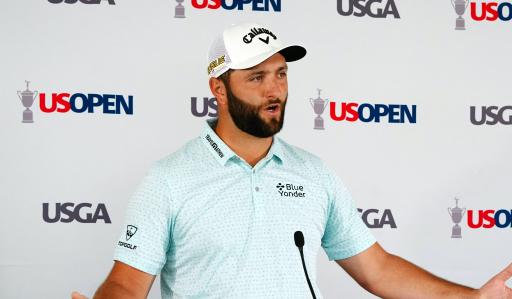 Jon Rahm reaffirmed his choice of PGA Tour legacy over Saudi riches and doesn't believe the shotgun starts and no cut-format on the LIV Golf Series are proper golf tournaments.

The defending US Open champion expressed his sympathy for the tour commissioner Jay Monahan who has seen the circuit through the Coronavirus pandemic and now the threat of the LIV Golf Series.

It is unconfirmed what the Spaniard may or may not have been offered to join Greg Norman's breakaway tour, but he spoke of a $400,000,000 figure that he said wouldn't change his family's lifestyle.

Rahm has received praise for his convincing speech during his Tuesday press conference and much like Rory McIlroy and Justin Thomas, he wants to win golf tournaments against the best players on the planet.

"I feel for Jay Monahan. If you see his time as a commissioner, he had to deal with Covid and now this. I don't know if he signed up for all this or not," Rahm said.

"I consider the PGA Tour has done an amazing job giving us the best platform for us to perform. I do see the appeal that other people see towards the LIV Golf. I do see some of the - points or arguments they can make towards why they prefer it.

"To be honest, part of the format is not really appealing to me. Shotgun three days to me is not a golf tournament, no cut. It's that simple. I want to play against the best in the world in a format that's been going on for hundreds of years. That's what I want to see.

"Yeah, money is great, but when Kelley and I - this first thing happened, we started talking about it, and we're like, will our lifestyle change if I got $400 million? No, it will not change one bit.

"Truth be told, I could retire right now with what I've made and live a very happy life and not play golf again. So I've never really played the game of golf for monetary reasons. I play for the love of the game, and I want to play against the best in the world.

"I've always been interested in history and legacy, and right now the PGA Tour has that.

Rahm was sad to be returning his US Open trophy this week in Massachusetts, but he could become the first European to win multiple US Opens since 1910.

Next Page: "Matt Fitzpatrick in US Open feature group: "Everyone is leaving the PGA Tour!"