Justin Thomas delivers his verdict on the early legal victory for the PGA Tour against LIV Golf ahead of the FedEx Cup Playoffs. 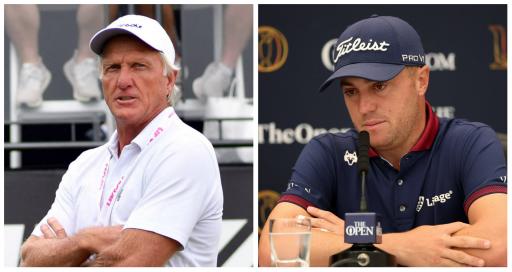 Justin Thomas says LIV Golf is such a distraction he can't even go to the bathroom at a friend's wedding without being asked about it.

Thomas, 29, has echoed the sentiments expressed by Rory McIlroy ahead of the FedEx Cup Playoffs on the PGA Tour.

Not because he isn't interested. Of course he is. It's been "personal" to him since the beginning of "this freaking tour".

He's not an expert. And neither are the groups of people on Twitter who are discussing golf's civil war.

In case you missed the news, a federal judge ruled that LIV Golf Invitational Series players Talor Gooch, Hudson Swafford and Matt Jones couldn't compete in the postseason on the PGA Tour.

As part of the wider antitrust lawsuit, they had asked for a temporary restraining order, arguing that if they were not permitted to play they would suffer "irreparable harm".

Judge Beth Labson Freeman wasn't having any of it. McIlroy said "common sense" had prevailed. The PGA Tour commissioner Jay Monahan said they could now focus on "what really matters" following the early legal victory.

"I wasn't following it that close," Thomas told the media.

"Not only being a golfer, but being a college dropout of two years, my knowledge when it comes to stuff about legality is pretty low, so I figured I could probably just check Twitter later in the day and I could figure it out or someone could give me a good synopsis.

He continued: "There's a lot of opinions on Twitter. Yeah, and I also was kind of going about my day.

"I was checking updates here and there, but it was just something to where again, I had zero impact, I couldn't control an outcome, I wasn't really worried about it.

"I had pretty good faith that when it gets to a level like that and you have lawyers and judges and everything involved that a decision is going to be made that's appropriate as opposed to maybe one that's, you know, getting pushed one way or the other. You know, I knew that however it was meant to be it was going to work out."

Thomas admitted that LIV Golf have been a huge distraction. It appears very difficult for the two-time major champ to just concentrate on golf.

Even when he's at a wedding he's being asked about it.

He said: "A funny story, just a couple weeks ago I had some really close friends get married and I was at the wedding and at the reception.

"I was on the way to the bathroom and got stopped by someone, start talking to me, saying he was a fan, it was great, and bam, next thing you know starts asking me questions about that and my detour, instead of going to the restroom, went straight to the bar to get a drink, because like I am not in the mood for this right now.

"It's just little stuff like that where you just would prefer not talk about it."

Thomas previously outlined why it feels personal. The plaintiffs named in the lawsuit are not just suing the PGA Tour. They are suing the membership. Including Thomas.

He said: "I mean, it was personal to me from the beginning, but I just -- I would say it's just getting more and more in depth. It's kind of like I said from the start, those guys were given an opportunity to go play and just go play.

"You can have your cake, but you don't need to eat it, too. And they got their fair share of a large, large amount of cake and go eat it on your own means.

"You don't need to bring it onto our tour. I think we keep it how it is and we can continue to build an unbelievable product that's given a lot of us like myself a great platform to just keep improving it."

Elsewhere, Cameron Smith has reportedly already signed a deal north of $100m with LIV Golf, according to The Telegraph.

This will reportedly be confirmed after the conclusion of the FedEx Cup Playoffs.

If Smith were to win the playoffs, he would topple Scottie Scheffler as the world's best player.

It would draw accusations that Smith would be grabbing "both bits of the pie".

Thomas said of this: "Yeah, if that were to happen, it would definitely appear that way. It's nothing hidden. I don't think it takes anybody on one side or the other, pro or against it, that that would be the case if that happens.

"But at this point I guess nothing's -- at least what I've learned is nothing is official until, you know, it's official.

"You hear so many names, so many rumors, so many things thrown out, and that's probably what's been the most annoying part to me is just when it's talking to the players themselves, hearing it from agents, hearing it from again all the people on Twitter that seem to know everything about everything, but until something is official official, I'm just kind of waiting, if that makes sense."