Jon Rahm believes that the astronomical scores over the weekend at the Sentry Tournament of Champions are a direct result of Tiger Woods' PGA Tour legacy. 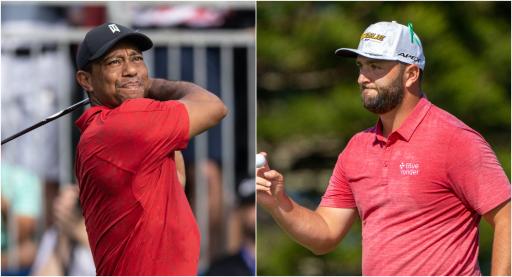 Jon Rahm attributed the incredibly low scores at the Sentry Tournament of Champions to the PGA Tour legacy of Tiger Woods.

If you told Rahm last Monday that on Sunday afternoon at Kapalua, you will finish on 33-under-par for the week, he'd have thought he'd won a seventh PGA Tour trophy.

But he finished second to Cameron Smith who finished one shot better off at the Plantation Course. Matt Jones also finished on 32-under-par back in third.

It was a great return performance for the World No. 1 who we hadn't seen since October on the DP World Tour. He believes there is one man responsible for modern golfers striving to better themselves.

"You have what’s probably a lot of purists of the game who are probably going, ‘Oh, you got to roll the ball back, shorter drivers, do this, do that'," Rahm said after the event.

"The simple fact is since Tiger started playing golf you’re getting people that take this game a lot more seriously. Everybody thinks about it more like athletes. So the level of the game - of all of us - it’s a lot higher than it used to be."

It is fair to say that Woods has affected the lives and careers of most golfers in the world. He set the standard for everyone else to try and reach.

The 15-time major champion won the Sentry Tournament of Champions twice when it was known as the Mercedes Championships in 1997 and 2000.

You could argue many factors have made PGA Tour golfers improve in the modern game such as advanced club technology and innovative exercise programmes.

But Woods' career has inspired golf fans, as well as players over the years, and his pied-piper effect on the sport was evident at the PNC Championship in December.

"Not to take away anything from anybody. Tiger’s an amazing player and he was better than all of us have ever been, but overall I think the average player, it’s a better golf player," Rahm added.

"And when you come to a golf course where the only defence is wind - at least you expect 20 miles an hour here, and we usually shoot 20- to 26-under and win the tournament."

There is every chance that the Sony Open in Hawaii this week could see more low scores. Kevin Na won the event on 21-under-par in 2021 and Justin Thomas set the event's lowest winning mark of 27-under-par in 2017.