Jon Rahm saves interview after a truly shocking question from a golf reporter at The American Express. 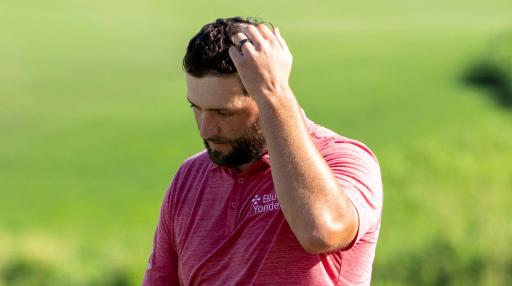 One of the biggest golden rules as a golf journalist is to do your homework before a big interview on the PGA Tour, especially when it's with World No.1 Jon Rahm.

Unfortunately for one scribe this week, things went badly wrong.

But to Rahm's credit, he carried on politely and laughed it off.

The golf reporter posed a question to Rahm ahead of this week's American Express that referred to his new Ted Lasso mentality on the PGA Tour when things don't quite go according to plan for him.

In case you're none the wiser, Ted Lasso is an AppleTV show.

Rahm, once a hot head on the circuit, told the media during the Playoffs last year how he was crediting Lasso's approach as an American football coach taking the reins of a European football club.

The Spaniard took specific note of Lasso's words of encouragement to one of his struggling players when saying "be a goldfish because they only have a 10-second memory."

So onto this week at The American Express, and here's what the golf reporter fired the way of Rahm.

"You used that Ted Lasso quote about trying to be a goldfish," said the reporter.

"Where are you, like what was the difference between how you felt after losing the playoff here to Adam Hadwin versus coming up one short in Hawaii to Cam Smith?"

I mean, at least the first part of his question was correct.

Unfortunately for the reporter, Rahm did not battle Hadwin in the 2018 playoff (back then known as the CareerBuilder Challenge).

It was in fact Andrew Landry.

The other issue with his question is that Rahm also won the playoff that year.

Be a goldfish now, Rahmbo.

"Well I won the playoff," said Rahm with a smirk on his face.

"Yeah, yeah. So the difference was big."

RELATED: JON RAHM OFF TO SOLID START AT THE AMERICAN EXPRESS

To Rahm's credit, he carried on politely and gave the answer the reporter was probably looking for in the first place.

"But from other times that I finished in second place, when I said that I think it was just, I was just trying to be funny, but which, it's just true, I mean sometimes forgetting certain things is good," added Rahm.

"But what I meant more is not forgetting but just getting over it, right? Get over yourself. It's that simple.

"You play bad, you did what you did, it's over, move on to the next thing. All you can do from that is learn. Learn from what happened, analyze what you did and move on.

"And that's it. You don't want to forget everything, right, because then you repeat the same mistakes over and over again, but I meant exactly that, right, just learn and get over it as quickly as you can, because luckily in golf there's always a next week."

Rahm made an impressive start to this week's tournament with a 6-under 66 at La Quinta in round one.

Patrick Cantlay and Lee Hodges have set the early pace though on 10-under par.

NEXT PAGE: PGA TOUR PRO AFTER SEEING ROOKIE TIGER WOODS: "WHAT THE F WAS THAT?"