Justin Thomas caught up in rules fiasco at Tiger's event: "What is going on!?"

Justin Thomas was caught up in a minor rules debate during the first round of Tiger Woods' Hero World Challenge on the PGA Tour. 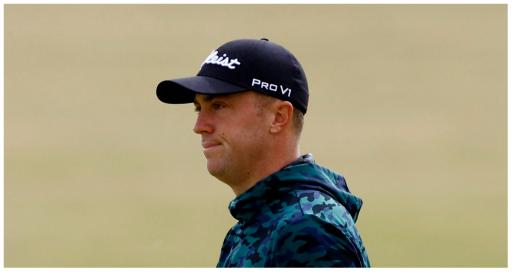 Justin Thomas was caught up a minor rules debate during the first round of Tiger Woods' Hero World Challenge in the Bahamas.

It all transpired on the par-5 9th hole on Thursday. If you weren't aware, preferred lies were in effect for the first round due to the wet conditions in Albany.

To the uninitiated that means lift, clean and place. This is what the 2022 U.S. PGA Championship winner wanted to do as he was certain his ball came to rest on what he deemed was fairway.

Related: Collin Morikawa on why his PIP finish "sucks"

Where his golf ball settled was also precariously close to the rough, which was cut in a similar way.

Thomas's Titleist Pro V1x had a massive clump of mud on it as well, adding to his problems.

The 29-year-old was heard saying on the hot mic to the rules PGA Tour rules official:

According to the official it was clear that there was a change of colour in the grass between where the golf ball was to where the rough was.

This is where Thomas explained that the grass was cut in the same length.

Thomas said to the official:

"But you see, what I'm saying, this is also beat down from the carts, but look at how much longer this is than this."

He then walked over to the rough and said:

"Like see, this is the same height [where his ball was]. I totally see it's down grain and it's a totally different colour, but … the change of the length of grass is just what kind of confused me."

Thomas was again denied relief but he was having none of it. He refused to give up there.

He asked for a second opinion and again he was told to play the ball as it lied. You can't blame a guy for trying...

Thomas settled for a five on the hole and carded an opening round of level par 72.

It was an entertaining round as he recovered from being 3-over par after the first three holes.

He got himself back under par at No. 15 but carded a double bogey at 16.

Thomas spent the earlier part of the week once again discussing the topic of LIV Golf.

When asked if he could see any peace between the warring tours in the immediate future, he said:

Thomas will play his second round of the Hero World Challenge alongside Sepp Straka, who replaced Woods in the field because of his foot injury.