Much like the views of Tiger Woods and Jose Maria Olazabal, Justin Thomas doesn't believe peace is possible between the LIV Golf Series and the PGA Tour. 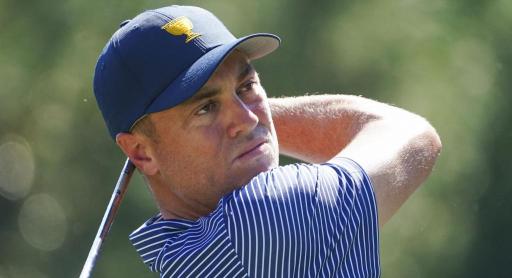 Speaking at a press conference ahead of the Hero World Challenge, Thomas echoed the recent thoughts of Tiger Woods and Jose Maria Olazabal who also believe cooperation isn't on the table.

Thomas didn't go as far as his close friend Woods in urging Greg Norman out of his role as CEO of LIV Golf, but revealed although he still speaks to players from the LIV Golf Series, a working relationship in the near future is highly unlikely.

Woods and Rory McIlroy have emerged as a key duo in the PGA Tour's response to the emergence of the Saudi-financed league which has acquired the likes of Cameron Smith, Dustin Johnson and Brooks Koepka with lucrative contract offers.

Thomas continued:
"And I'm also really not too worried about it. Those guys, they're doing their thing and we're out here trying to do ours and play well. We have great leadership in Tiger and Rory, and they're trying to lead the group of guys out here to create a great product out here on the PGA Tour.
"You know, we've been the best tour for a very, very long time and we plan on continuing to be that. I'm excited about the future. I know that they are, too. Yeah, it is what it is."

Thomas was announced alongside Jon Rahm as the first two players to sign on to TGL, the new brain-child of Woods and McIlroy and a new concept which excites Thomas for the future of the Tour.

This initiative is one of many that the Tour intend to use in order to nail down its best players and combat the rise of LIV Golf. 14 more players, assuming Woods and McIlroy participate too, are yet to be announced for the Monday night primetime league starting in 2024.

Thomas finished in the top 10 of the 2022 Player Impact Program, banking $7.5m. Despite playing just three times on the PGA Tour this year, Woods picked up his second consecutive winning paycheque from a scheme that rewards pushing the needle and exposing the game to a wider audience.

Perhaps not quite as vocal as his two pals with who he'll compete in The Match on December 10,  but Thomas has always been strong in his support for the Tour and has never entertained the thought of making the controversial switch to LIV.