Collin Morikawa has revealed why he was annoyed at the U.S. Open over LIV Golf speculation and why it "sucks" he finished 11th again in the PIP. 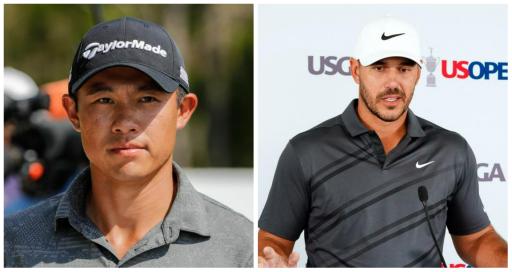 Collin Morikawa says "it sucks" he finished 11th in the PGA Tour's social media contest once again as he opened up on what he believes truly sparked his LIV Golf rumours.

Morikawa joined the Barstool Sports' podcast and spoke to Dan Rapaport before the Hero World Challenge where he chatted about a number of topics including the 2022 Player Impact Program, the rumours linking him to Greg Norman's league and his wedding to Katherine Zhu.

The 25-year-old American, who was spotted using some brand new TaylorMade irons in Albany, has had a frustrating 2022. After finishing second at last season's CJ Cup, Morikawa went without a win for the entire calendar year.

In late November it was confirmed that Tiger Woods pipped Rory McIlroy to the $15m top prize for generating the most media interest in their Player Impact Program.

The scheme was introduced last year. Critics suggest it is essentially a slush fund that was created in an attempt to prevent the top talent joining LIV Golf, commissioned by Norman.

Last year Morikawa finished 11th. The only problem was that the inaugural scheme only paid 10 places. He appeared to find it somewhat amusing as he changed his Twitter handle to Co11in in tribute.

The same thing happened again in 2022 but the PIP was expanded to rewarding the top 20 players in the $100m pool. Morikawa earned $3m.

He could only laugh at the results.

Morikawa told Rapaport that this "sucks", although he is "not complaining".

"You know it is what it is. I can't dispute the facts. It sucks, but you know what at least we are getting paid one through to 20. I am not complaining. It is what it is.
"I know a lot of it had to have been golf-based and that was a big category that I kinda slacked on this entire 2022."

"I was surprised when I heard I was 11th again. But it is what it is. Like I said, I can't do anything about it. I'm still getting paid, which is great, and hopefully we make [good in] '23 and somehow not finish 11th again."

Before LIV Golf even began, it was confirmed that every single player in the Official World Golf Ranking top 100 had been approached.

Morikawa obviously is in this bracket but he has consistently denied rumours linking him with a move away.

The former champion golfer of the year has a theory on what sparked his rumours.

One was doing the rounds before the U.S. Open at The Country Club at Brookline.

Morikawa was asked why he came across somewhat annoyed at the major.

"Yeah, at the U.S. Open I mentioned Brooks' [Koepka's] comment. And at that point, I think it was the week after he committed to LIV and, because I had said something that Brooks said similarly, or I quoted him on it ... that then I was hence going to LIV.
"Look, I think the media is great I think what you guys do... you guys help promote us players mostly in a positive way. But your guys' job is just to put out news and what is going to grab eyes and grab attention.
"I think with LIV and the PGA Tour it was like [the media was thinking] 'How do we find this in for who is next going to LIV?'"

Morikawa said he understood this is what some people wanted to read.

"I get it, I get it, I get it. But they were like literally taking anything I said [and] making it like, 'Oh you have a connection. You're going.'
"And, to be honest, I don't even know who is going. I don't know was going, I don't know who is going. I knew nothing.
"I was so far out of it from actually knowing anything that it was just annoying and funny. You guys thought I knew more when in reality I didn't. I'm not lying to you guys or hiding anything. I didn't know and it was a continuous cycle."

Surely these comments will only spark rumours about a potential defection for Morikawa.