Justin Thomas appeared on The Tonight Show with Jimmy Fallon where he spoke about the Presidents Cup and the PGA Tour Netflix documentary series. 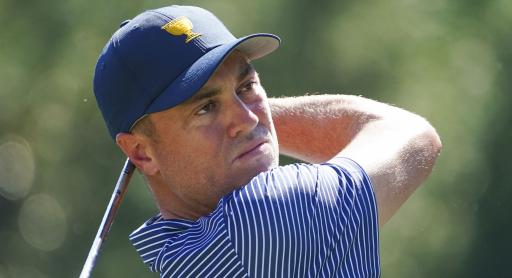 US PGA champion Justin Thomas revealed his excitement for the Netflix documentary series on the PGA Tour which will be released in 2023.

Speaking to Jimmy Fallon on The Tonight Show, Thomas told the host that he was one of the players who were followed by the Netflix film crews, giving an access-all-areas style of insight into the Tour.

Earlier in the year, it was announced that the PGA Tour would give Netflix unprecedented access to produce a series inspired by Drive to Survive, a ground-breaking show based on Formula One on the popular streaming site.

The likes of Jordan Spieth, Matt Fitzpatrick and Collin Morikawa are set to feature, while Dustin Johnson, Brooks Koepka and Sergio Garcia were also set to be involved despite moving to the LIV Golf Tour.

"To be perfectly honest, in a situation like this, I am a little more nervous with a film crew because this is not my comfort zone," Thomas said on Monday.

"When I'm on the golf course, that's what I do so I'm very comfortable in that atmosphere. I think it's going to be great. It's going to be on Netflix in early 2023.

"It's just going to give a lot of people (the opportunity) outside of golf to take a look inside of golfer's lives. Just more of the day-to-day. They had moments where they're in the car with me driving to the golf course or they're watching me work out, or they're having dinner with some guys.

"I think it's going to be a really cool thing for people to see."

The Drive to Survive-style of series has also inspired talks for the English Premier League to produce a similar type of show. Back in March, Fitzpatrick was spotted wearing a microphone at the WGC Match Play as part of his involvement.

The series is set to show the Englishman's win at the US Open as well as coverage from each major championship, The Players Championship and the FedEx Cup Playoffs.

Golf fans will no doubt be even more excited to watch following the disruption in the sport's landscape via the emergence of LIV Golf and the division it has caused with the PGA Tour.