The Norwegian fired a bogey free 62 at El Camaleón Mayakoba Golf Course on the PGA Tour to set up the chance to defend his title. 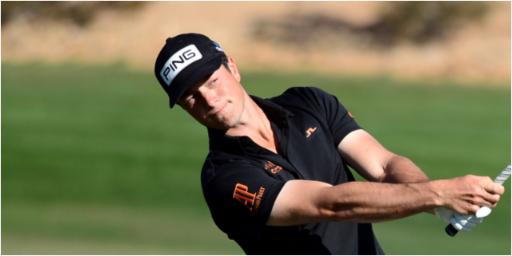 Flawless Viktor Hovland has set up the chance to defend his title at the World Wide Technology Championship on the PGA Tour.

The Norwegian went deep at El Camaleón Mayakoba Golf Course in Mexico and signed for a stunning third round 9-under 62 in Mayakoba.

Four birdies on his front nine were followed by five more returning home as Hovland, 24, went flag-hunting on the par-71 layout.

He droves greens, shaped shots beautifully into pins and putted like a demon.

This was Hovland in complete control while going at full throttle.

A lead of two strokes over the field will mean that you'd be a foolish person to bet against him at this point.

He's attempting to win for the third time on the PGA Tour.

Viktor Hovland birdies the 18th for a -9 today @WWTAtMayakoba.

He leads by two. pic.twitter.com/ia8OHVfMrj

Now he has the chance to here again and be the first player to defend a title since Brooks Koepka at Bethpage Black in 2019.

But he'll have to trade blows with Justin Thomas on Sunday as well as Talor Gooch who will try and chase him down.

Thomas started so poorly here in Mexico this week it looked like he was going to join Koepka in missing the cut.

At 3-over par through his first nine here Thomas was out of sorts and firing loose shots everywhere.

Fast-forward 45 holes and Thomas has surged into contention at 16-under par and is chasing Gooch and Hovland.

Focused Thomas, 28, notched four birdies on his front nine as his putter matched the temperature.

Returning home, three more followed in a blemish-free round of 7-under (64) which sees him searching for his 15th PGA Tour title.

Gooch started well enough on Saturday with three birdies going out, but another two and an eagle propelled him briefly to the summit.

He's at 17-under and looks like he will become a PGA Tour winner one day judging by how neat and tidy his game is.

Elsewhere, Sergio Garcia finds himself in the top 10.

The Spaniard is joined by Mexico's Carlos Ortiz and the United States' JJ Spaun.

Right over the flag. pic.twitter.com/db0hTInaTg

Koepka was the big name to miss out here in the wraparound season.

Rickie Fowler is still battling away but is too far back to realistically make the top 10.

At the start of the week Hovland suffered an unfortunate stroke of luck as Danny Lee snapped his driver into three pieces.

The Norwegian was happy to let Lee test out his PING G-425 for a speed training session on the range.

Unfortunately, it all went badly wrong.

But while Hovland's driver is broken his game clearly isn't.

Surely a major title beckons in 2022?

Never a doubt. @JustinThomas34 from downtown to grab a share of the lead. pic.twitter.com/yAV31H4ZEP

MORE: THIS THEORY PROVES TIGER WOODS WILL BE BACK