Justin Thomas gave a hilarious response to Collin Morikawa's tweet on Tuesday afternoon when he confirmed his commitment to the PGA Tour. 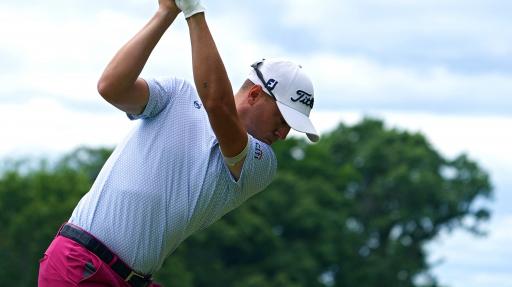 Two-time US PGA champion Justin Thomas was left bewildered by a comment Collin Morikawa posted on Twitter on Tuesday.

After speculation grew that Morikawa could be the next big name to join the LIV Golf Invitational Series, he wanted to make his commitment to the PGA Tour clear.

After the 25-year-old was done with the main part of his statement, he concluded with: "Now if you’ll excuse me, I’ve got some cereal to pour in my milk."

It was this sentence that Thomas felt he couldn't let go and many golf fans felt the same way. Why does Collin Morikawa put his milk in the bowl before his cereal?

"You going milk first is more of a concern than you going anywhere..." Thomas hilariously replied to his fellow American and 2021 Ryder Cup teammate.

I'm sure Thomas was as relieved as the rest of us to read Morikawa's post on Twitter. He reminded his fans of what he said back in February at the Genesis Invitational where he came tied second.

"My entire life I've thought about the PGA Tour. I've thought about playing against Tiger, beating his records, whatever, something that might not even be breakable, but I've never had another thought of what's out there, right?" Morikawa said that week at Riviera.

"I've never thought about anything else, it's always been the PGA Tour. Has (the LGIS) opened up things for us as professional golfers, to open up things for the PGA Tour to look at what to do better? Absolutely.

"We've seen a lot of changes - some good, some bad, some that are still going to be amended I'm sure as time goes on. Right now, you look at the best players that I see and they're all sticking with the PGA Tour and that's where I kind of stay and that's where I belong. I'm very happy to be here."

Along with Rory McIlroy, Justin Thomas has been the most vocal supporter of the PGA Tour as the dominoes continue to fall around them about the LIV Golf Invitational Series.