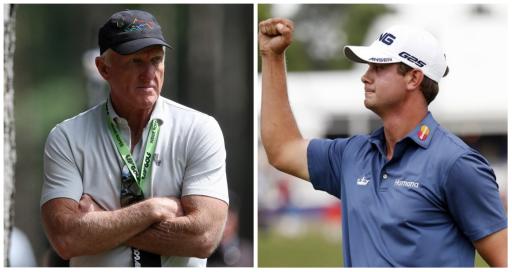 PGA Tour pro Harris English says “it sucks” Brooks Koepka is not in the field for the Travelers Championship ahead of his imminent move to LIV Golf.

Related: Max Homa has a theory on how LIV Golf negotiate with potential players

But he has backed tour bosses and the commissioner Jay Monahan to “figure it out” despite more and more players defecting to the Saudi-backed rival circuit for dizzying pay checks.

English, 32, has had a miserable 2021-2022 season. He was riding high on the best form of his career that saw him selected for the United States Ryder Cup team last September which dismantled Europe 19-9.

After playing the Sony Open in Hawaii earlier in the season, he has had to sit out four months due to a torn labrum in his right hip. It is the same injury that has caused Bryson DeChambeau issues.

English returned to the game at the Memorial, where a pair of 77s saw him miss the cut. He played at the US Open last week where he made the weekend and finished T-61st.

He spoke to the media immediately after the news that Koepka potentially had decided to up sticks and hop on over to the LIV Golf league despite previously claiming he was going nowhere.

“It sucks Brooks isn't playing,” English, who is the defending champion at TPC River Highlands, said.

“I thought he was in the field weeks ago and obviously to lose a top player like that kind of sucks.

“You want to play against some of the best guys in the world and it is what it is.

“We [have] got a great field this week, with Cantlay and Rory and Xander, Sam Burns, Scheffler, a lot of guys who are playing some really good golf right now.

“So, I think it shows how great a field this place pulls every single year.

“People love the golf course. People love coming to Hartford. The community that wraps itself around this tournament.”

He added: “But I love the PGA Tour. I've dreamed about being on the PGA Tour since I was a kid. This is my 11th year out here.

“[I] still have to pinch myself every day that I'm playing on the PGA Tour against the best players in the world.

“So, I enjoy it out here and like I said, with winning that tournament last year, looking at the names on that trophy, that means more to me than anything.

“Having my name on a trophy with Lee Trevino, Arnold Palmer, you can go down a list of everybody that's won this tournament.

“You can't take that away from me now, my name's going to be on that trophy for years and years and it's something I'll never forget.”

English said he didn’t sit through the entire meeting PGA Tour commissioner Jay Monahan held with the membership due to other commitments.

But he is backing Monahan.

He said: “We're in a weird time right now. I know the PGA Tour, Jay's doing everything he can to inform the players about what's going on.

“And I know they're having a big meeting this afternoon, so we'll probably know more from that.

“But I trust they're doing everything they can in the best interests of the players and we got to let 'em go to work.”

English said the proposed changes to the PGA Tour schedule would be a massive benefit to the players.

Especially as the wraparound season is tough on players who want to see more of their families, despite enjoying events that fall in that period.

“Guys have families and they want to play a little less golf,” he said.

“However, they can manage that to the best of both worlds of having the top players and the guys who are fighting for their card.