Justin Thomas shared pictures of a break in California with his bride-to-be but Collin Morikawa had to step in. 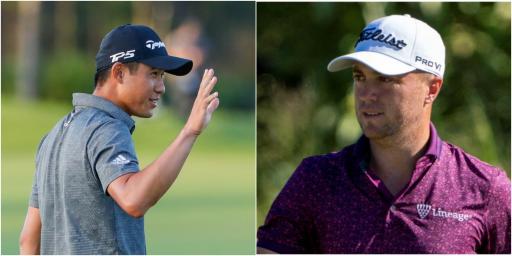 Justin Thomas appears to have learned a valuable lesson from Collin Morikawa after posting snaps of a relaxing break.

Thomas shared photographs of his short trip away in California alongside his bride-to-be Jillian Wisniewski ahead of the WM Phoenix Open.

The 28-year-old posted pictures in Big Sur with Wisniewski and their dog, Frank. The last photograph of Frank is an absolute mood.

Thomas even managed to sneak in a game of golf before he headed to Phoenix with odds of 12/1 looking to claim his 15th PGA Tour title.

But Morikawa was at hand to correct Thomas over his use of the term, "the fiancée". Morikawa explained:

Who is Jillian Wisniewski?

The pair have been dating for around six years now. She is reportedly the same age as Thomas.

Thomas announced their engagement on the No Laying Up podcast.

Wisniewski is a graduate of the University of Kentucky and she has previously worked at an ad agency in Chicago.

The couple have appeared together at various PGA Tour events and team events such as the Ryder Cup and the President's Cup.

Wisniewski is also said to be close with the partners of Rickie Fowler and Jordan Spieth, who are very close friends with Thomas.

She famously almost missed Thomas winning his first major title in 2017 at the PGA Championship.

Thomas looked like he was going to win all week and she managed to get a last minute flight.

He said of that event: "I truly felt like I was going to win. I remember my girlfriend was supposed to fly out at about 7pm and I was like, you need to change your flight. I just feel like I don't want you to miss this. I feel like I'm going to get it done."