Phil Mickelson responds to critics: "It will come out soon enough"

Phil Mickelson says he has "not explained" everything that has transpired over the last seven months. That might change soon. 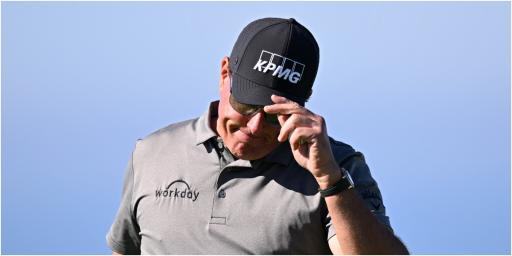 Phil Mickelson has explained "it will come out soon enough" why he launched a scathing attack on the PGA Tour.

Mickelson, 51, sent shockwaves through the golf world last week when he explained he felt the Tour's greed was "beyond obnoxious".

Those comments were in response to the PGA Tour's aggressive tactics to try and fend off the Saudi money and threats of breakaway leagues.

Mickelson explained that he believes the top 100 players in the world have been contacted over the new venture, led by Greg Norman.

Extraordinary sums of money are said to have been offered to the likes of Bryson DeChambeau (he denies this) and Dustin Johnson.

To go backwards a little bit, Mickelson appears irked that the players do not currently have access to their own media rights.

Related: Phil Mickelson weighs in on a GolfMagic debate

"If the tour wanted to end any threat, they could just hand back the media rights to the players," Mickelson told GolfDigest.

"But they would rather throw $25 million here and $40 million there than give back the roughly $20 billion in digital assets they control.

"Or give up access to the $50-plus million they make every year on their own media channel.

"There are many issues, but that is one of the biggest," he said.

One person who took issue with Mickelson's comments is the analyst Brandel Chamblee, who took aim at Lefty in an Op-Ed.

Chamblee described Mickelson as a "ventriloquist puppet" for a sportswashing, murderous regime.

"Horrors such as that are hard to hide and impossible to ignore," wrote Chamblee.

Chamblee also took issue with some of the figures Mickelson was quoting. He also commented on his previous incursion in a civil case.

This was Lefty's response in a thread in a discussion about what caddies get tipped on the PGA Tour:

I have not explained all that has transpired over the last 7 months that got me to say what I said. It will come out soon enough.

The PGA Tour have so far declined to comment on his broadside, though they do say their business model is similar to other sports leagues.

Last week Lee Westwood confirmed he had signed an NDA about what was discussed in Jeddah.

Dustin Johnson all but confirmed an offer was there. Ian Poulter and Henrik Stenson are said to be mulling offers.

Several other professional players have weighed in on the controversial topic.

Richard Bland believes Rory McIlroy is needed if the venture really is to get off the ground, as he thinks he is still golf's biggest draw.

How this all plays out will be interesting to see. We await Mickelson's comments eagerly.