PGA Tour pro Robert Garrigus was robbed of a hole-in-one in a cruel way at Pebble Beach. Another player didn't seem too fussed. 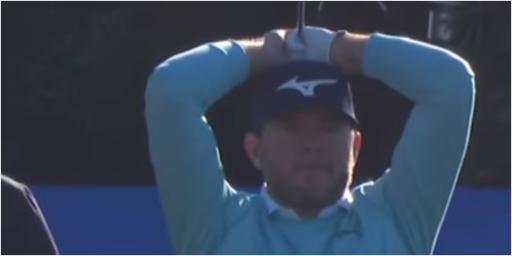 Robert Garrigus can count himself as one of the unlucky ones on the PGA Tour this week after being robbed of an almost certain ace.

Playing in his final round, Garrigus took aim at the 12th hole and sent his ball high up into the stratosphere. "Bite," he said as the ball landed.

It landed perfectly and made its way towards the hole and then hit the pin but somehow the ball stayed up. What the heck?!

Happy Gilmore would have launched into a tirade. Go back to your home, ball. Surely Covid rules apply here? This was in.

Garrigus simply couldn't believe it. Neither could we. He looked stunned as he held his head in his hands at Pebble Beach.

While most viewers would have been sympathetic with the pro, Dylan Fritelli took a rather dim view:

While we pass no comment, you can make of that what you will.

Garrigus ended up finishing in a tie for 16th place after finishing his week at 10-under par.

The 44-year-old has won once before on the PGA Tour, that win coming in 2010 at the Children's Miracle Network Classic.

Garrigus has detailed before his problems with substance abuse.

In 2011, he told Golf Digest he and other Web.Com tour players regularly smoked marijuana on the course during events.

He told the publication: "Oh yeah, there were plenty of guys on the Nationwide Tour who smoked in the middle of the round.

"We always talked about it. You could go in the Porta John and take your drags."

Tom Hoge claimed his first win on the PGA Tour after Jordan Spieth's late charge came to a crashing halt in the final two holes.