Jordan Spieth has opened up on his omission from the 2019 Presidents Cup during the worst slump of his professional career. 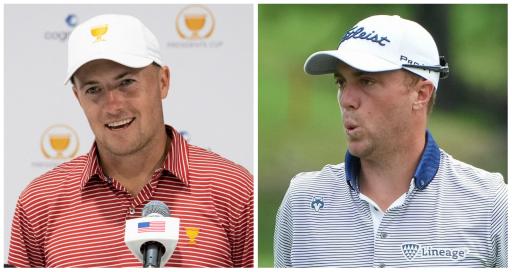 Jordan Spieth has revealed Justin Thomas won't let him forget how bad he was playing a few years ago as he opened up on his 2019 Presidents Cup omission amid the worst slump in his professional career.

Cast your mind back to that time and Spieth was all at sea. He didn't know it at the time, but he would go without a victory for another two years.

For the very first time in his career, he was not competing in a team event for the United States. The missed cuts were coming thick and fast.

Related: What we can learn from Jordan Spieth's pre-shot routine

His dramatic freefall down the Official World Golf Ranking was swift and unrelenting. It sucked for Spieth fans. It sucked even more for Spieth.

"Everyone went on planes to go Australia [in 2019], and I went on an anniversary trip with my wife, and I remember that I probably wasn't the most fun," Spieth told the media at Quail Hollow ahead of the 2022 Presidents Cup.

"I remember just being in a lull — being in contact with those guys and knowing they were in those team rooms. I just never thought I'd miss one after being on a number in a row.

Related: Phil Mickelson won't talk to any of us, says Davis Love III

"And it sucked because I also didn't have a good year where it would help me the next year into the Ryder Cup. And I got a little bailed out in 2020 because I wouldn't have made the team if they had a 2020 Ryder Cup and I was able to earn my way into 2021. I may have missed two if it weren't for COVID.

Scottie Scheffler and Billy Horschel offer their opinions on whether there should be a Ryder Cup-style match between the PGA Tour and LIV Golf .

He added: "It sucked. I remember it was a really tough spot. I hated every second of it because I know how fun they are and I know how beneficial these weeks are, these matches, for individually how you're going to play the next year."

He also tasted victory at RBC Heritage this April, though he attributed his win to a key bit of advice from his wife Annie.

Apparently Thomas - who ripped the LIV players' letter for world ranking points - also chided Spieth earlier in the week about just how bad Spieth was playing in 2019.

"Pat, Xander and Jordan and I were sitting together last night talking about Australia," Thomas, 29, told the media in his press conference.

"He was sitting there, like 'Cool, guys, I know.' It wasn't by coincidence. I'll say that."

Spieth's swing may not have returned to the same level that saw him claim three major championships.

But it's clear he's in a considerably better place than he was in 2019.

Next page: One of Tiger's Scotty Cameron putters sells for mind-boggling sum