K. H. Lee fired a superb round of 63 on the last day at TPC Craig Ranch to win his second consecutive title at the AT&T Byron Nelson. 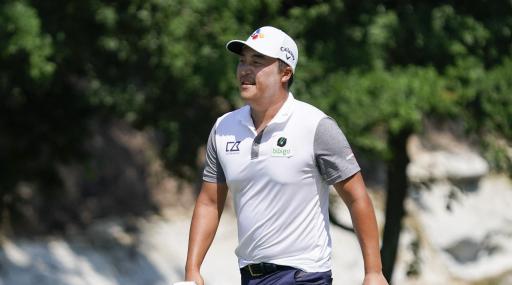 K. H. Lee shot the lowest round of his PGA Tour career on his way to winning the AT&T Byron Nelson for the second year running.

The talented South Korean loves playing at TPC Craig Ranch in McKinney, Texas and he has become the first player to win this event on back-to-back occasions since Tom Watson in 1980.

The 30-year-old is also the first player in PGA Tour history to win the same event in consecutive years with a score of 25-under-par or better.

Lee began the final round four shots behind Sebastian Munoz, but his round of 9-under-par took him to 26-under-par after he birdied the 72nd hole.

The final round was full of drama, twists and turns. The excitement was initially provided by Xander Schauffele who made three birdies on his front nine and a superb hole-out eagle on the par-4 6th hole.

Related: Tiger Woods arrives at Southern Hills to practice ahead of PGA Championship

He rolled in yet another birdie on the 10th hole to get within two shots of the lead. The 28-year-old was tied 107th after round one but he was now in contention for his sixth PGA Tour victory.

James Hahn was the hero of the third round by shooting a 61 and he moved into a share of the lead on 20-under-par with a birdie on the 3rd hole.

Another player to throw his hat in the ring was Hideki Matsuyama. He made six birdies in his opening eight holes on Sunday to move into a share of the lead on 20-under-par.

Meanwhile, Schauffele made his sixth birdie of the day on the 13th hole to also reach 20-under-par. At one stage, Schauffele, Hahn, Munoz, Lee, Matsuyama and Justin Thomas all shared the lead on this score.

Schauffele made his eighth birdie of the day on the 16th hole to take the lead on 22-under-par, while Speith also hit this mark with a birdie on the 8th hole.

After making five birdies on the front nine, Lee hit his approach to the par-5 12th hole to four feet. He rolled in his eagle putt and added a birdie on the hole after to take the lead on 25-under-par.

Schauffele finished with an incredible 11-under-par 61 to finish on 23-under-par, but Matsuyama set a better clubhouse mark of 24-under-par after signing for a 10-under 62.

Spieth and Munoz both found birdies on the 14th hole to reach 24-under-par and they were the closest pursuers to Lee who held a one-shot lead with three holes of his day left.

Lee confirmed victory with his seventh birdie of the day on 18 and although Spieth and Munoz could force a playoff with an eagle on 18, it was Spieth who managed a birdie to finish one shot behind in outright second on 25-under-par.