Jordan Spieth: "My rehearsal is not exactly what I'm trying to do"

Jordan Spieth has explained where currently is with his golf swing after contending again on the PGA Tour. 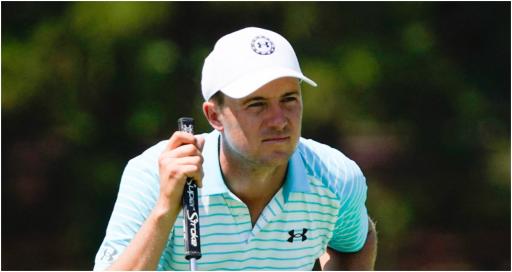 Jordan Spieth admitted his rehearsal practice swing is "not" what he is trying to do as he revealed he is inches closer to feeling where he wants to be after another near miss on the PGA Tour.

Spieth, 28, needed an eagle on the 72nd hole at TPC Craig Ranch at the AT&T Byron Nelson to force a playoff after the brilliant K.H. Lee fired a Sunday 9-under 63 to defend his title. His short chip never really threatened the hole and in the end he finished one stroke behind.

Still, it was four rounds in the 60s for Spieth. Had he won, he would have been undefeated heading into this week's PGA Championship at Southern Hills after winning his 13th win at RBC Heritage.

Spieth got a standing ovation when he made his PGA Tour debut at the Byron Nelson when he was 16 years old and he received another warm reception in front of his home fans in Texas this week.

Asked what are some of things Spieth was pleased with on week 19 of the PGA Tour schedule, he said he was happy with making some "five-foot sliders" down the stretch and feeling more a fluid stroke with his putter.

Then he deep dived into his swing. Golf fans have been discussing the dramatic change in rythm and tempo and the excessive over the top move that Spieth appears to want to feel.

Spieth, when he won the Texas Open in 2021 to claim his first win since his the 2017 Open, said he was trying to rediscover the swing of his youth.

How close does Spieth feel now to that swing of his youth?

He told the media: "Closer than I was then. I'm striking it better, consistently. I feel like I've got every shot.

" [The]17th [hole] today was just an awful number for me and it's a shot that hitting like a chippy draw was just not in my repertoire for a long time.

"And I haven't wanted to hit it under pressure either, even last year. So today I wanted to kind of hood a pitching wedge and I said, 'You know, I'm going to trust this, I'm going to learn from this shot and I'm going to take seven, eight yards and draw a 9-iron without it crossing over left of the pin'.

"That's just a shot that I just haven't had and I just hit maybe my best shot of the day into there.

"So it's holes like that -- and then into 18 I hit a 3-wood and tried to hit a 30-yard high slice into the green because I couldn't get a hybrid there, but 3-wood's over the green.

"So it's like being able to kind of sit here and play these back-to-back crazy shots and feel comfortable doing so means it's really close.

"But it's really, really close on the range and normally that starts to, everything just inches a little bit closer.

"So I mentioned it down there, I don't feel like I have to go change much, I just feel like I'm doing the right things.

"My rehearsal is not exactly what I'm trying to do, but it gets me closer to where I want to be."

Only Collin Morikawa, Jon Rahm, Scottie Scheffler, Rory McIlroy and Justin Thomas are favoured by the bookmakers ahead of Spieth to hoist the Wanamaker this week.

But judging by recent performances it would be no surprise at all to see Spieth claim his fourth major to complete the grand slam.