Why are there no South Korean players on LIV Golf right now?

LIV Golf 'insider' confirms to GolfMagic why there are no South Korean players on Greg Norman's Tour at the moment... 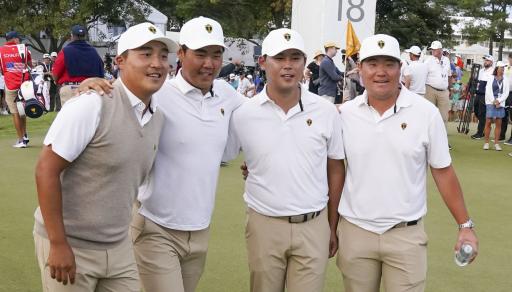 You might be wondering why there has not been a single South Korean player teeing it up on the LIV Golf Invitational Series so far this season, but there is a simple reason according to a LIV Golf 'insider' who has spoken to GolfMagic.

It is mandatory for South Korean males aged between 18 and 35 to complete two years of military service.

The only official exemptions they have are either by winning a medal at the Olympic Games or a gold medal in the Asian Games.

There is also another *unofficial* exemption, but we will come onto that in a moment.

In such instances of winning a medal, athletes are asked to do four weeks of basic military and then they are obligated to attend a few days of annual military training.

An exemption on military service would obviously prove hugely beneficial for the likes of International Presidents Cup players Tom Kim, Sungjae Im, KH Lee and Si Woo Kim in order to maintain their playing careers at the very top level.

As an example for how a thriving golf career for a South Korean can come unstuck, cast your mind back to Sang-moon Bae who won twice on the PGA Tour in 2013 and 2014, and was even called up by captain Nick Price into the Presidents Cup in 2015.

That was his last event before military service, which ended in August 2017.

Bae did manage to win on the lower-tier circuit in 2018, but now at the age of 36 and without a PGA Tour card, he looks on from outside the world's top 1000.

The next chance for a South Korean to win a gold, silver or bronze medal at the Olympics will come in 22 months time in Paris.

The Asian Games, which is held every four years, had previously only ever featured amateur golfers. But there has been a recent rule change that will permit professional golfers competing when it is staged in 12 months time in China (the tournament was pushed back a year due to Covid).

In order to qualify for the Olympic Golf Tournament, players need to be well up the Official World Golf Rankings (OWGR), which is obviously a huge issue for any player competing on LIV Golf at this very moment.

When it comes to Olympic Golf qualification, the field comprises the top 60 in the Olympic Golf Rankings, which takes into account the OWGR.

The top 15 are all eligible for the tournament, with up to a maximum of four golfers per country.

Outside of the top 15, it then comes down to the top two ranked players from their respective country (that does not have two or more players inside the top 15) to make up the field of 60.

Here's the full qualification process for the 2024 Olympic Golf Tournament in Paris, and the current world rankings.

When it comes to the Asian Games, up to two professionals will be named from South Korea, so once again there is lots of pressure on picking up valuable world ranking points.

So why are there no South Koreans on LIV Golf at the moment?

LIV Golf tournaments remain shut out of receiving any world ranking points and this is seeing some of the world's best players on LIV Golf such as Dustin Johnson, Brooks Koepka, Bryson DeChambeau and Patrick Reed take a huge tumble.

Therefore South Korean golfers competing on LIV Golf would be suffering a similar fate, a costly one at that when it comes to the Olympics and Asian Games.

Open champion Cameron Smith recently made the move to the Saudi-bankrolled circuit but he has only slipped one place in the OWGR to third place behind Rory McIlroy.

Scottie Scheffler remains World No.1, but do not tell that to LIV Golf CEO Greg Norman who considers that nonsense.

All of the LIV Golf players last week sent a signed letter to OWGR chairman Peter Dawson "urging" him for inclusion.

It is also understood that another exemption for full military service will be applied should a South Korean golfer win a major, once again placing huge pressure on a player's world ranking in order for them to qualify for the four majors during the season.

While this is not an official exemption as such, it is understood that when a South Korean male does win a major championship that they will be let off the hook where full military service is concerned. Winning a major would more than likely be considered an achievement that "enhances national prestige".

YE Yang became South Korea's first male major champion when taking down Tiger Woods at the 2009 US PGA Championship, but he had already completed his military service while he was an amateur golfer so this particular rule was not required.

Si Woo Kim, who took down and "p***** off" Justin Thomas in the Sunday Singles at the Presidents Cup last week, had asked military officials if his 2017 Players Championship victory was enough for an exemption but he was denied.

Kim also has two other titles to his name on the PGA Tour, but they still matter little where military service is concerned.

PGA Tour victories do not count as an exemption, so even recent first-time winner Tom Kim and two-time winners Sungjae Im and KH Lee at this moment will still need to take two years out to complete their military service at some point in time.

The only way to receive an exemption, and ensure they are not taking 24 months out of their playing careers, is to slip on an Olympic medal, win a gold medal at the Asian Games or etch their name into the record books with a major victory.

"There are no South Korean golfers going to LIV Golf at this very moment in time as they all want access to the majors and the Olympics," a LIV Golf Insider has told GolfMagic. "It is the only way for them to avoid military service."

So for those of you potentially worrying or maybe even hoping a pumped-up Tom Kim moves to LIV Golf, we can assure you that will not be happening anytime soon. Not at least until LIV Golf sorts out its ranking mess.