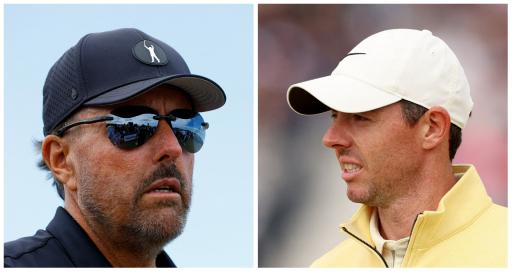 Rory McIlroy has hit back at Phil Mickelson's comments about seeing the PGA Tour "trending downward" if it doesn't engage with LIV Golf.

Speaking ahead of the CJ Cup where the Northern Irishman, 33, is hoping to defend his title, he said that "anyone with a logical view" of the game can't agree with what Mickelson said.

Mickelson, 52, turned heads when he spoke to the media ahead of LIV's Invitational in Jeddah, where claimed he now believed that he was on the "winning side" of golf's civil war before adding that ultimately the controversial series will be embraced. "I love the side that I'm on," he said.

McIlroy clearly doesn't see it that way and also appeared to take a dim view of the stance of the six-time major champion just like Jon Rahm did.

He said: "Look, again, I've spoke about this at length and I think the people that have decided to stay here and play these tournaments, they or we haven't done anything differently than what we've always done, right? We're playing these events, we're PGA Tour members, we're sticking to the system that has traditionally been there.

McIlroy continued: "I certainly don't see the PGA Tour trending downward at all. All the talent, most, 95 percent of the talent is here. You've got people like Tom Kim coming through who that's the future of our game.

"I don't agree with what Phil said last week. I understand why he said it because of the position he is in, but I don't think anyone that takes a logical view of the game of golf can agree with what he said."

McIlroy is hoping to become the World No.1 again this weekend. He can dethrone Scottie Scheffler providing he wins and the American doesn't finish solo second or T-2.

McIlroy is making his season debut in the 2022-2023 PGA Tour season. He is in good form having pipped the aforementioned Scheffler to the FedEx Cup when he won the Tour Championship at East Lake after closing out that tournament with a sublime 66.

McIlroy won the $18m bonus money for that feat.