Phil Mickelson says he "never did an interview with Alan Shipnuck" and then takes another dig at the PGA Tour ahead of LIV Golf Jeddah. 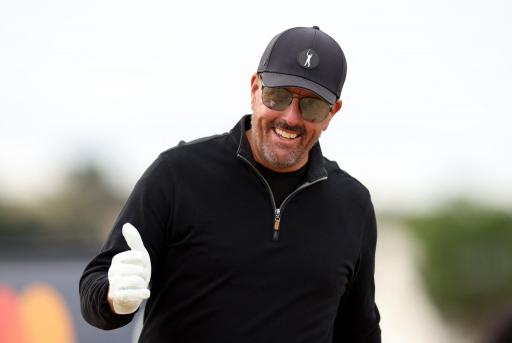 Phil Mickelson may have shocked the world with his "scary motherf*****s" comment made to golf biographer Alan Shipnuck earlier this season but the six-time major champion claims he "never did an interview" with him on the eve of LIV Golf Jeddah.

Mickelson, who is the captain of the Hy Flyers GC team on the LIV Golf Tour, was quizzed by the media as to whether or not he had changed his opinion of Saudi Arabia ahead of this week's tournament at Royal Greens Golf & Country Club.

Interesting moment from Phil's LIV presser in Saudi Arabia. Asked about his previous comments about Saudi, he answers:

"So I will reiterate, I never did an interview with Alan Shipnuck." pic.twitter.com/fLIrlkyJe5

"So I will reiterate, I never did an interview with Alan Shipnuck," Mickelson said firmly in his pre-tournament press conference on Thursday.

"I find that my experience with everybody associated with LIV Golf has been nothing but incredibly positive and I have the utmost respect for everybody that I've been involved with."

Related: Phil Mickelson reacts to utterly hilarious henna tattoo of his own logo

Mickelson ultimately landed himself in hot water when his controversial interview remarks over the phone to Shipnuck in November 2021 were made public in February 2022.

Shipnuck had been putting the finishing touches to his new book when the comments went viral on social media.

Mickelson said the controversial remarks were "off the record", but Shipnuck denied such talk.

"To be clear, our interview was on-the-record, and a deeper explanation is at the top of this column," Shipnuck tweeted on February 22, 2022.

Shipnuck, who interviewed more than 200 subjects for the book, claims during their conversation Mickelson told him that he did not pretend to be excited about "hitching his fortunes to Saudi Arabia."

Mickelson allegedly told Shipnuck that he had "a once in a lifetime opportunity to re-shape the PGA Tour".

Revealed: Here's what Mickelson text Shipnuck when his controversial comments were made public

This is the muthah of all #AskAlans, as I go deep on all things Phil. To be clear, our interview was on-the-record, and a deeper explanation is at the top of this column. https://t.co/njPPS1MwMh

Most damagingly for golf's oldest major champion, he called the Saudis "scary motherf***ers" during his conversation with Shipnuck and he even suggested their money had finally given him and the players "leverage".

Mickelson's comments quickly drew derision from the golf world and his fellow players, with Rory McIlroy describing him as "naive and ignorant".

Lefty then apologised and took some time out of the sport to focus on himself and spend more time with his family as a result of the comments, which consequently saw him lose a number of his biggest sponsors such as KPMG and a paused contract with his long-time partner Callaway.

Mickelson's comments were of course made public several months before a LIV Golf Invitational Series led by Greg Norman and bankrolled by the Saudi Arabian Public Investment Fund was eventually set up in June 2022.

Shipnuck was even controversially removed from the media centre during that first LIV Golf tournament in England.

Mickelson returned to compete that week in Hertfordshire but his game appeared flat.

It was a similar story over the next four LIV Golf tournaments but Mickelson did at least show glimpses of returning to form with a tie for 15th at LIV Golf Bangkok last week.

Back in August, Mickelson was one of a number of LIV Golf players to file an antitrust lawsuit against the PGA Tour.

But at the end of last month, Mickelson withdrew from the lawsuit and so did Ian Poulter, Talor Gooch and Hudson Swafford.

Mickelson felt he wasn't needed after LIV Golf attached itself to legal proceedings.

He then sat down with golf writer Bob Harig and told how "all players should be appreciative of what LIV Golf is doing".

Now looking ahead to the penultimate event of the LIV Golf season in Saudi Arabia this week with a fresher outlook on life both on and off the course, and Mickelson believes he is on the right side of the divide.

He also could not resist another dig at the PGA Tour:

"I firmly believe that I'm on the winning side of how things are going to evolve and shape in the coming years for professional golf," said Mickelson on Thursday.

"I love the way they involve us and listen to us in decisions. I mean it's so inclusive, it's so fluid that things, LIV Golf is leading. Whether it's shorts, whether it's other aspects of professional golf that are going to change and evolve, those positions will be led by LIV."

Mickelson also told the media this week how he thinks the investment made by the Saudi Arabian Public Investment Fund will soon help contribute to a rise in Saudi Arabian Tour professionals.

Some may even compete on LIV Golf.

Related: Mickelson reacts to hilarious henna tattoo of his own logo

"I do believe that we will start to see some players from Saudi Arabia play on the LIV Tour," said Mickelson.

"When golf became an Olympic sport we started to see a lot of money go into golf in countries like Korea, like China, India, parts of, other parts of Asia.

"And today, 16 years later or so or however many years later, 10 years later, we're starting to see many of those players make it on tour in professional golf.

"I think that we are starting to see that investment in Saudi golf and the young players from Saudi Arabia start to come up. And in 10 years time I think you're going to see a lot of players from this country on tours in professional golf, both men and women."

Next Page: Patrick Reed lashes out at "false reporting" at Open de France