Smylie Kaufman POKES FUN at himself as he shoots an 87 on PGA Tour! 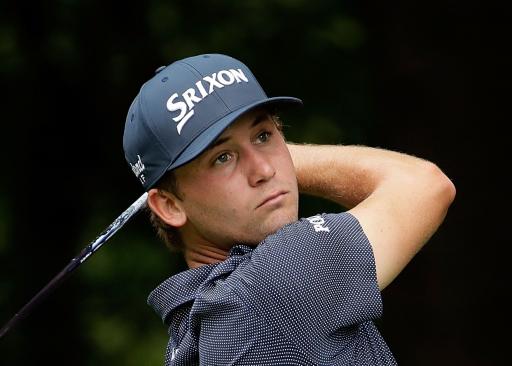 It may have been a comeback year on the PGA Tour for the likes of Rory McIlroy, Jordan Spieth, Brooks Koepka and Hideki Matsuyama, but for other former winners on the circuit such as Smylie Kaufman, the struggles continue.

While Kaufman may be best known as a starter in #S2BK alongside Spieth, Rickie Fowler and Justin Thomas rather than victor of the 2015 Shriners Hospitals for Children Open, the now 29-year-old American has somehow fallen from 48th in the world rankings to a current 1613th.

That ranking is set to get even worse next week as Kaufman carded a disastrous 15-over 87 in round one of the Barbasol Championship on the PGA Tour, a tournament running alongside The Open Championship - a tournament he played in once back in 2016 but missed the cut.

Kaufman's opening round saw him go out in 46 shots having started on the 10th, much down to taking a 10 on the par-4 18th. Things did not get much better thereafter as he came home in 41 shots, which included a quadruple-bogey eight on the 7th.

To Kaufman's credit though, and in Leonardo DiCaprio 'Wolf of Wall Street' style, he took to social media to make it clear he would not be leaving early by withdrawing from the tournament.

If you want a player to pull for, make it Smylie Kaufman!

He shot a first round 87 in the @BarbasolChamp and didn't WD.

How many other players would tee it up for second round? Very few.

Smylie Kaufman, an early contender for trunkslam of the week after blowing 15 over at the Barbasol and going full Tin Cup on the 18th. #trunkslam pic.twitter.com/sREpAXhWXa

Dude, you’ve been a stud and will continue to be one. When you play the @JDCLASSIC in the next few, I want to introduce you to my 8 year old son. “This is Smylie, he’s a Dog who don’t have an ounce of quit in him. Be like Smylie.“

Good luck, man. I believe in you.

Dude you’re gonna win on the PGA Tour and I’m gonna be there. I can’t wait to see it. Fight through this and win, your talent is there. This only adds to the legend.

You are an easy golfer to root for with that kind of attitude. I can't wait til you make it back to where you were, will make it that much sweeter.

Unfortunately things did not get a whole lot better for Kaufman on day two as he finished with a quadruple-bogey eight on 17 and bogey-five at 18 for a round of 6-over 78.

It all added up to a 21-over par total to finish last place of the 127 players completing 36 holes, and he missed the cut by a staggering 25 shots.

Despite sustaining an elbow injury that ruled him out of action for a prolonged period before the pandemic, the latest missed cut marks a seventh consecutive missed cut for Kaufman, and he even withdrew from the tournament in his eighth last start.You have to go back to the 2019 Australian Open for the last time Kaufman made a cut when finishing tied 27th.