Luke Donald said that after 20 years as a pro, missing the cut in brutal fashion with a triple bogey at the WM Phoenix Open "really hurt". 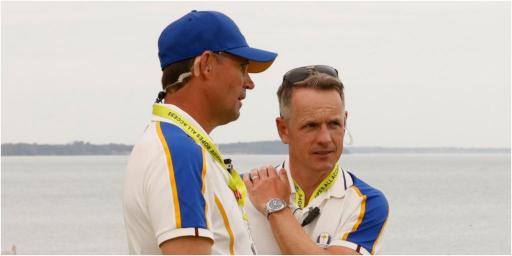 Luke Donald said he was humbled after he got the ringing endorsement from Padraig Harrington to be the next Ryder Cup captain.

Though he may have felt a different emotion after he made a triple bogey at his last hole at the WM Phoenix Open to miss the cut.

Donald started on the back nine at TPC Scottsdale and made the turn at 2-under, dropping no shots.

No problem, right? At the fifth, Donald, 44, made a birdie. Surely he would coast to the 2-under cut line? Wrong.

Disaster came at the last hole. He found the fairway bunker at the par-5 18th signature hole, then put his approach just short of the green.

His pitch then found the front left bunker protecting the green. His third shot? Over the back to the first cut.

Donald's fourth shot left him with an uncomfortable putt. He missed that, then missed another tiddler. Ouch. Double bogey seven.

We've all been there Luke. We feel your pain. Even Donald took to social media afterward to express his frustration.

"After 20 years as a pro I can tell you this one really hurt," Donald posted.

Donald was just a number of big names who didn't get to play at the weekend.

Played some lovely golf the last two days here at the @WMPhoenixOpen only to spoil it all on the last! After 20 years as a pro I can tell you this one really hurt, I can’t believe I did that!!! Sorry to be missing the weekend for what is an amazing week.

Donald is widely expected to be named the next captain of the European side. The biennial event heads to Rome in 2023.

Several ex Ryder Cuppers believe he is the man to lead Europe at the Marco Simone Golf & Country Club.

Padraig Harrington said: "All I can say is that Luke [Donald] would be great," Harrington told the Daily Mail. "Behind the scenes, he does a terrific job. His management style...he knows. He's got the experience, and I'd thoroughly recommend him."

Donald said he was humbled by this.

"I would love to have the opportunity to do that. I haven't spoken to anyone at the European Tour, so nothing has been confirmed. Yeah, I don't know where I stand with that.

"I've had great experiences with the Ryder Cup, played on four and won four and been a vice-captain at a couple and just love the tournament itself and what it represents. If I was given the opportunity, I would dearly love it and be very grateful and honoured to take it up.

"It's something, again, I would love to do and I know there's a worthy list of people who could do this job and be the next Ryder Cup captain, but it's nice to have my name up there."