Haotong Li decided to get the attention of some fans in classic fashion at the Ras Al Khaimah Classic. 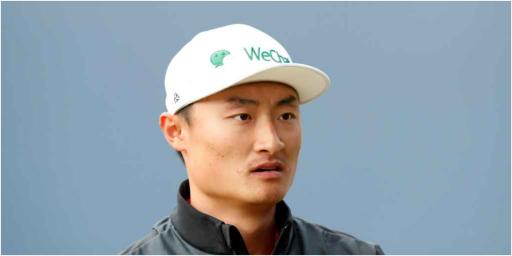 He was a rising superstar of the game a few years. So much so, he won the 2018 Omega Dubai Desert Classic, edging out Rory McIlroy.

Li even held the lead in a major at the 2020 PGA Championship at TPC Harding Park.

Then he seemingly disappeared off the face of the planet. He emerged again a few weeks ago on the PGA Tour rocking a bucket hat on the range.

He's working hard on his game. When he gets going - I mean - really gets going, he is a thrilling player to watch.

It's great to have Li, 26, back in the game. It appears there is absolutely never a dull moment when he is involved.

During his second round of the Ras Al Khaimah Classic on the DP World Tour, he got upset with some noisy fans.

Ordinarily, a marshall would have just calmed them down. But it appears that Li just went for an all-time classic attention grabber.

Haotong Li made sure he had quiet as he took his tee shot at the Ras al Khaimah Classic on the DP World Tour pic.twitter.com/oRnDLhsHAd

Perhaps his feathers were ruffled as this was off the back of a double bogey two holes earlier. Li's round also included two eagles.

Down the stretch, he appeared irritated with his play. He was seen slamming his putter into his bag. A double bogey at the final hole would have frustrated him even more.

Had he not made the putt for a double, we're pretty sure he would have gone absolutely nuclear.

By day's end, he found himself at 4-under par, and eight strokes behind leader Ryan Fox.