Phil Mickelson reportedly had an interesting exchange with a young reporter at the PGA Championship in 1999. 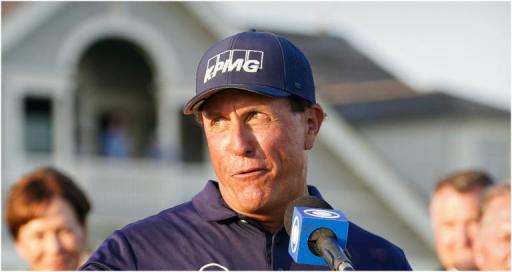 Back in 1999, Phil Mickelson finished T-57 at the PGA Championship.

It was the first of many winless major years for Mickelson and little did he know that the eventual champion of the tournament, a young Tiger Woods, was embarking on a period of utter domination.

How Lefty must wonder how his career would have turned out if it were not for Woods? Though it has to be said you wouldn’t be surprised if Lefty was made to work much harder because of him.

Of course, by now, you know the story. Woods outlasted Garcia to win by one stroke and the pair embarked on a petty rivalry that reached fever pitch with accusations of racism.

That week Mickelson shot 72-72-74 and an ugly 77 to round off his week. As you can imagine, Lefty would have been pretty ticked off shooting a figure closer to 80 in his final round at a major.

Especially more so considering what was expected of this young showman. He was made to wait a very, very long time before he captured that first major.

The golf writer, Alan Shipnuck, may well remember the tournament because of the memorable battle between Woods and Garcia down the stretch.

But he also claims that it was at this moment he claims to have seen “the other” side of Mickelson who was “spoiling for a fight” after word had got back to him about a story he didn’t like.

In his new book “Phil: The Rip-Roaring (and Unauthorized) Biography of Golf’s Most Colorful Superstar”, Shipnuck outlines that Mickelson told him to “throw the first punch” in an exchange.

At the time, Shipnuck was writing “a weekly reader mailbag” for CNNSI.com and word had reached Lefty about a discussion online about Mickelson’s physique.

A reader had referred to him as “Full Mickelson”. Another one had discussed who was pregnant, Mickelson or his wife Amy. Obviously unpleasant.

Shipnuck writes that he asked Mickelson “a benign question” among a scrum of reporters.

Wrote Shipnuck: “I’m not sure if he conflated readers’ words and made them mine or if he was miffed that I was giving a platform to such sophomoric discourse (in retrospect, a valid objection); either way, Phil was spoiling for a fight when, back at Medinah, I asked him a benign question for a Ryder Cup preview story.”

“I’m not going to answer that because I don’t respect you as a writer,” Mickelson allegedly said.

Then there was reportedly silence. Shipnuck claims the two went and spoke under a more private tunnel near the grandstand.

He claims Mickelson told him what he wrote in his “little web column” was “bull****”.

Mickelson is said to have told him: “If you have a problem with me, just throw the first punch.”

Lefty then, when faced with stunned silence, said: “That’s what I thought”.

He then marched away, Shipnuck claimed.