PGA Tour superstar Max Homa has revealed why he named his son after Cameron Young and why he was gutted he didn't get swept up in the LIV Golf rumour mill. 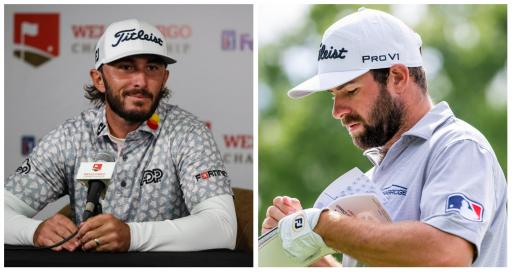 Max Homa says he named his newborn son after Cameron Young as he revealed during the past 12 months he was hoping to get swept up in the LIV Golf rumour mill.

There was of course Cameron Smith, the aforementioned Young and former PGA Tour player Cameron Tringale who has joined LIV.

Oh, and the Australian Cameron Davis who was in the International side at the 2022 Presidents Cup at Quail Hollow Club.

However after playing with PGA Tour rookie of the year Young at Quail Hollow, Homa and his wife Lacey had made up their mind.

He told the media on Wednesday when asked which "25 Camerons on the PGA Tour" he named his son after:

"So it was pretty frustrating and funny, but we had picked the name out, my wife had got a necklace well before this. I mean, not saying that Cam young and Cam Smith haven't been playing well, but before like The Open when they battled, and then, you know, Tringale inserts himself into the news, so then it felt like I was just hearing the name Cameron constantly. But I would say my kid, if anybody, was named after Cam Young."

Homa said he informed Young his son was named after him recently.

"I was talking to him about it and I was like, I was like here's your kind of little mini-me. He said my Cam is significantly better looking than himself, which felt nice because he's got a nice beard. Hopefully my kid can live up to that. Yeah, this Cameron thing has really popped off in the golf world."

Homa has been quite outspoken on the topic of LIV Golf since its emergence. And it's fair to say he's had some fun with all the drama.

So much so, he claimed that when Brooks Koepka removed "PGA Tour" from his Twitter bio shortly before he jumped ship, Homa did the same.

Unfortunately, his change didn't quite get the same amount of traction as four-time major 32-year-old Koepka.

The rumour mill has been in absolute overdrive all throughout 2022 and it shows no signs of abating.

On this subject, Homa said:

"I was fortunate -- obviously I did feel bad for some of the guys getting caught up in the rumour mill because they have got to answer these questions about things that they've never done. You know, hearing stories about certain guys saying, oh, I hear he's gone and then I'll talk to them and they'll say I haven't talked to them in months, so this is just made up. I feel bad for them, I feel that's a much harder gig."

Homa said he tried to put himself into the LIV Golf rumour mill just for the fun of it.

"I changed my bio on Twitter once when I think Brooks changed his bio and everyone figured out he was going or something like that. I was like, oh, I'm going to get in on this and see if people catch on, but didn't realize that my Twitter bio doesn't get a ton of traction, so that was news to me. Yeah, I don't know.
"It was -- the craziness of all of this was I feel like a little more outside than it was inside. Inside, like I said, I thought it was funny and fun, we were just trying to make light of it.
"It's people's lives, they can do what they want to do. I don't know, I feel like a lot of us had fun with it. I had fun with it. It was taken as like slights to the LIV Tour, but I never meant, I just make fun of everything that I do and other people do.
"So it was funny. I would have liked to be caught in the rumour mill so I could have run with it for a little while, it would have been good for that PIP thing, but was not lucky enough to be caught up.