Phil Mickelson has bitten back after Tiger Woods claimed the PGA Tour took out a massive loan to get through the COVID-19 pandemic. 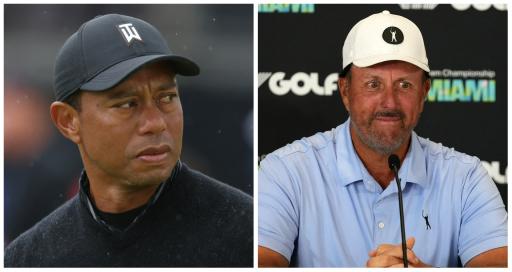 There was simply so much to unpack from Tiger Woods' press conference before the Hero World Challenge.

Woods put Greg Norman in his cross hairs and called for the LIV Golf commissioner to quit so the PGA Tour can "talk freely" with their rival.

Elsewhere Woods suggested the Official World Golf Ranking system was flawed. His point of view was different to that of Rory McIlroy.

There is absolutely no denying that the landscape of professional golf has changed considerably over the last 12 months.

Even Woods admitted LIV Golf has taken him by surprise and he said he was particularly taken aback with the animosity involved.

The PGA Tour have announced a number of elevated events for the 2023-2024 season with prize purses to rival LIV Golf's $25m invitationals.

Elsewhere, there is guaranteed money for PGA Tour members in the form of a travel stipend. The Player Impact Program has also seen a cash injection.

Clearly, after LIV Golf upset the status quo, the players are benefitting financially. Whether or not golf will be a better product for the consumer remains to be seen.

Asked whether Mickelson needed to be thanked for "shaking the tree", Woods told the media:

This was quite a claim from Tiger.

It was later addressed by the PGA Tour in a statement to SI's Bob Harig. According to PGA Tour HQ, Woods' claim is not true...

The PGA Tour clarified today that it did not take out a loan to deal with the pandemic in 2020 as Tiger said during his news conference.. . The Tour used reserves and "mitigating actions'' and would have seen a significant reduction in reserves w/o a return to golf in June 2020

The Tour also clarified that Tiger might have been referencing the fact that reserves would have dipped below $100m without a return to golf in 2020.

Mickelson couldn't help but address Woods' comments on social media. And it appears that Lefty's numbers don't quite add up:

Anybody care to explain to him how a balance sheet works? https://t.co/7rAf3H7vso

You have your shorts and no cut tournaments, I'm assuming you cleared your debts, move on... https://t.co/Rw5EzbnmY4 pic.twitter.com/tZxhG2Xq71

In case you forgot, Mickelson caused quite a stir when talking about the PGA Tour's finances before his famously controversial remarks about the Saudis that led to him being dumped by some of his sponsors and forced him into exile from late February to June.

Mickelson accused the PGA Tour of sitting on a pile of money. It was cash Mickelson believed belonged to the players.

He previously said to GolfDigest: "How the f*** is that legal?"

In full, what Mickelson previously said about the PGA Tour's handling of media rights:

"It's not public knowledge, all that goes on. But the players don't have access to their own media. If the tour wanted to end any threat [from Saudi or anywhere else], they could just hand back the media rights to the players. But they would rather throw $25m here and $40m there than give back the roughly $20bn in digital assets they control. Or give up access to the $50-plus million they make every year on their own media channel. There are many issues, but that is one of the biggest."

Mickelson also made the claim that he was charged by the PGA Tour the sum of $1m each time he wanted to participate The Match. He described this action as obnoxiously greedy.

The six-time major champion has now been booted from the franchise, owing to his association with LIV Golf.