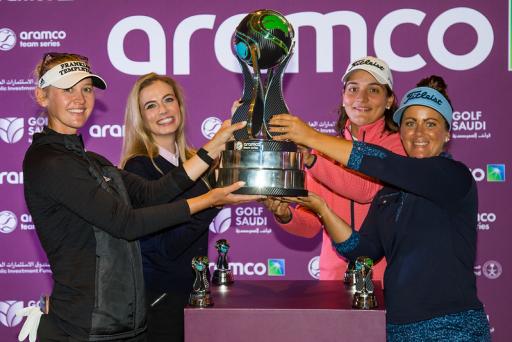 Team Jessica Korda clinched victory at the Aramco Team Series in New York after they beat Team Popov in a two-hole playoff at Glen Oaks Club.

After starting the day two strokes behind the overnight leaders, Jessica Korda, Karolin Lampert, Lina Boqvist and amateur Alexandra O’Laughlin produced another solid round to finish with a total of 41-under-par.

With the sun having set in New York, captain Korda headed to the floodlit 17th to compete in the playoff against Sophia Popov and her par was enough to clinch her second LET title, while it was a first LET title for Lampert and Boqvist.

For Team Popov, who were also two shots off the lead overnight, they had a solid front nine which saw them seven-under-par for the round.

With tricky conditions and some tough closing holes, the leaderboard tightened as they came down the stretch but a clutch birdie from Hayley Davis on 18 ensured the team competition went to a playoff as they also finished on 41-under-par.

And despite a good tee shot on the first playoff hole, Popov was unable to capitalise, and the captains headed back to the tee box which ultimately saw Team Korda triumph.

Team Hull had an exceptional final day producing a round of 20-under-par to put them at a total of 40-under-par and set the clubhouse lead which ultimately left them in third place.

Off the back of the sensational team performance, it was Charley Hull who recorded the round of the day in the individual competition.

After starting her round with four consecutive birdies, the Solheim Cup star carded a flawless round of 65 (-7) to catapult her to 12-under-par and win the individual title - her third LET victory.

"I was playing well the first couple of days, but today I really got it going. It was tricky conditions out there, so that is probably one of the best rounds I have played ever. I was very proud of myself and to finish with a birdie I’m very happy," said the 25-year-old.