Newly-married PGA Tour pro Brandon Matthews tied for the lead on day one of the Sanderson Farms Championship at The Country Club of Jackson. 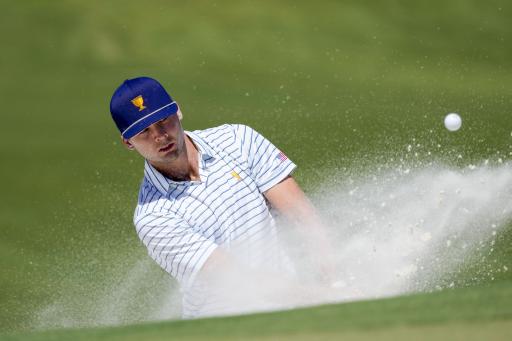 Newly-married PGA Tour pro Brandon Matthews - one of the circuit's bigger hitters - had the perfect line after he tied for the lead on the first day of the Sanderson Farms Championship.

In the second tournament of the PGA Tour's 2022-2023 season, Matthews fired a 5-under 67 at The Country Club of Jackson. His round included five birdies, an eagle and two dropped shots.

It was good for a share of the lead with Andrew Putnam. The defending champion, Sam Burns, pictured, also started well. But at the time of writing, he was three shots back.

Matthews spoke to the media after his first round about the big day.

The 28-year-old - who is searching for his first PGA Tour victory - tied the knot with Danielle last weekend in Pennsylvania.

Matthews, unfortunately, had to withdraw from the curtain-raising event at the Fortinet Championship - which was won by Max Homa -  after Danny Willett endured a nightmare finish.

He told the press the first song they danced to was "You & Me" by Dave Matthews Band.

"I was actually way more nervous on Saturday," Matthews said.

Related: Jordan Spieth just made his largest ever charitable donation

"That's probably why I don't have any nerves right now. Everything went so great. You know, she looked absolutely unbelievable. It was a fantastic day for both of us."

Then Matthews, who earned his PGA Tour card by finishing inside the top-50 players on the Korn Ferry Tour last season, chimed in with an amusing line.

"I told [Danielle] when I walked off, we should have got married sooner," he said.