Brandon Matthews is making his PGA Tour debut at the Wells Fargo Championship. 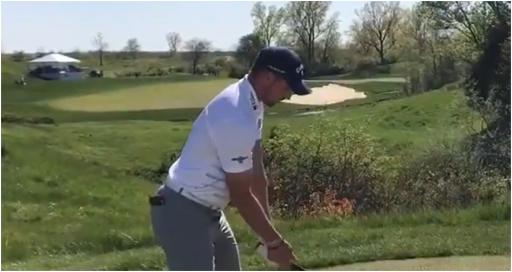 One PGA Tour player making his debut this week is hoping to leave a lasting impression.

Brandon Matthews, 27, is playing in his first event at the Wells Fargo Championship and he hits it absolutely miles.

When Matthews entered his press conference, one thing you notice straight away is the sheer size of the player.

Just how far does he send it? Well, he for starters he told the room that he carries his 6-iron 216 yards.

"Yeah, yeah, absolutely," Matthews said when asked his power has always been a help.

"And obviously it's a big strength, but in the same breath, it's harder to control. When you have more speed, the ball goes offline easier."

You can say that again. Matthews qualified for this tournament thanks to a sponsor's exemption.

He is currently ranked fourth in the Korn Ferry Tour's standings and obviously has full PGA Tour status as one of his targets.

. @B_Matthews12 led the field in driving distance last week on the @WebDotComTour at 342 yards per drive on average! #HolyToledo @NoLayingUp #sauce pic.twitter.com/HutBuZGc8e

His average driving distance is absolutely mind-boggling. In 2019, he averaged 331.3 yards off the tee.

We have already had one bomber make his PGA Tour debut this season.

He averaged 373.07 yards off the tee on the Sunshine Tour last year but missed the cut.

So how did he get into the game and how did he develop his power off the tee?

Matthews told the media: "I got a great story. I'll make it as short as I can.

"My dad got me into the game. The 15th hole at my home club, Emanon, has a little lake to cover and he used to sit me on the women's tee when I was 4, 5 years old and it was probably 60 yards to cover it.

"So from a very young age I was just trying to hit it as hard as I can, so I developed power before I developed technique.

"So I think that was one of the main reasons why I hit it so far, because I just learned it at an early age, hit it as hard as you can."