Jordan Spieth and Annie make their largest ever charitable donation

Jordan Spieth's foundation has granted their largest ever charitable donation of $500,000 to the Children's Medical Center Foundation in Texas. 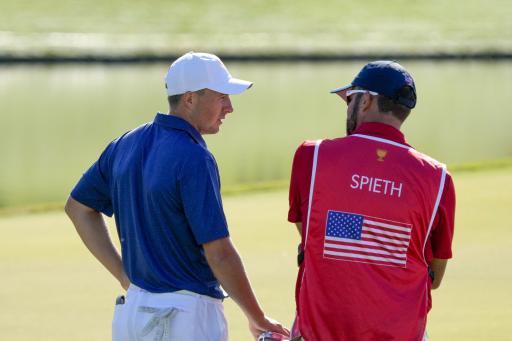 Jordan Spieth - fresh off confirming the news he will debut at the PGA Tour's PNC Championship with his father - has revealed that the Jordan Spieth Family Foundation (JSFF) has made their largest ever charitable donation of $500,000.

The money will go to the Children's Medical Center Foundation (CMCF). It is one of the largest and most prestigious pediatric health care providers in the United States, based in Spieth's home state of Texas.

Spieth said: "Annie and I are very grateful to the incredible oncology staff at Children's Health for their life-saving work.

"We have a personal connection to pediatric cancer, and to this hospital specifically. And while we hope research continues to make this issue nonexistent in the future, for now, our focus is on improving each family's experience as much as possible."

The Jordan Spieth Family Foundation has announced a $500,000 gift to @childrens—the largest gift in the foundation’s history.

The gift will go toward an expansion at Children’s Medical Center Plano. pic.twitter.com/h30qioo7k4

This is the largest donation granted to any organization from JSFF.

In recognition of their generosity, a family support lounge will be named after Spieth.

"Jordan and Annie Spieth have been long time supporters of the Children's Health mission, which they understand deeply," said Brent Christopher, the president of CMCF.

"We're extremely grateful for this generous gift as the Plano campus of Children's Health expands to meet the growing population of kids in North Texas. Having access to the best pediatric care for children and families close to home is critical."

He added: "This commitment to help kids battling cancer is at the heart of what it means to make life better for children."

This news follows Spieth's incredible performance at the 2022 Presidents Cup. He took his record in the Cup to an incredible 8-0-0 on home soil. He also became the first American to go 5-0-0 in the Cup since 2011.

The victory for the U.S. side sparked some incredible celebrations, and some hilarious roasts over social media.

Next page: Jordan Spieth's approach to ping pong is hilarious